By Andrew Beasley (Twitter). Statistics are for Premier League games only, and are correct up to and including Fulham away.

Liverpool have been scoring goals for fun in 2013/14. Their record of 2.54 goals per league game is more than the club have managed in every single one of their previous ninety-eight full seasons in the top flight.

At the time of writing (pre-Swansea), the Premier League’s top two scorers are both Reds; Luis Suárez with twenty-three goals has been ably supported by Daniel Sturridge with sixteen.

But whilst the hitmen create the headlines, who creates their goals? The obvious starting point is assists, and at present the captain leads the way with nine, with Suárez just behind on eight.

However, it’d also be interesting to know who was involved in the build-up prior to that. Long term Tomkins-ites may recall that Paul has previously done work on goal involvement (and here is an example from 2010/11), but my investigation is based on Opta stats so is less subjective than previous efforts.

At the same time it’s less accurate perhaps too (as Paul awarded points depending on importance of contribution) but then I imagine my version was also far less time-consuming to assemble!

Liverpool FC have this season become the first and only Premier League club (to my knowledge) to use Opta widgets on their website. This has enabled me to view and record which players were involved in the build-up to goals. Opta have a stat they call ‘second goal assist’, which according to their definition is:

A pass/cross that is instrumental in creating a goal-scoring opportunity, for example a corner or free-kick to a player who then assists an attempt, a chance-creating through ball or cross into a dangerous position.

So in other words, the pass prior to the assist. I have decided to, where applicable, record the four involvements (which can include things like lay-offs and ‘touches’, as well as passes) prior to the assist, as five before the goal itself seems a reasonable (albeit arbitrary) time frame to be realistically deemed to be involved. I’d imagine very few goals feature all eleven of a team’s players in the build-up after all, though Sterling’s goal at White Hart Lane did! 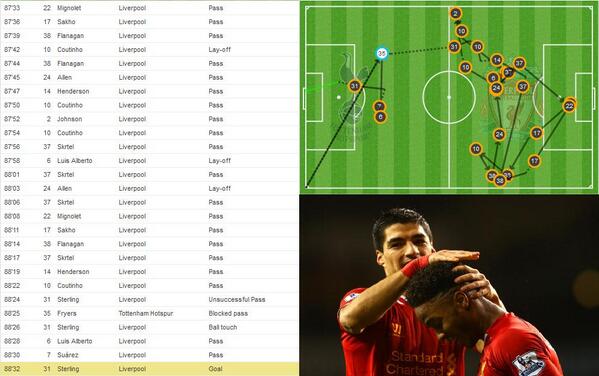 I have awarded four points for the second goal assist, down to one for what I am terming the ‘fifth goal assist’, and then divided the number of minutes played by the total points to create a minutes per involvement score.

Clearly this system is not without its flaws; like all Opta data it only focuses upon ‘on ball’ data, so contributions like Coutinho’s dummy for Sturridge’s goal at Villa Park won’t be included, as an example. But it will hopefully provide some food for debate.

Only twenty-six of Liverpool’s sixty-six league goals to date have included a longer build-up chain beyond an assist, so I have included them all in the table below, regardless of the small sample size of some of the players. 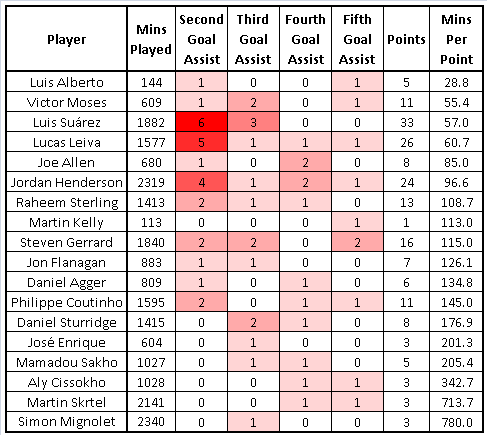 If we exclude the top two due to their small samples, it’s probably no surprise to see that Luis Suárez leads the way for players who’ve had at least seven full games worth of pitch time.

But directly below the Uruguayan is his fellow South American, Lucas Leiva. This is interesting for two reasons:

Lucas may not create too much directly himself, but I don’t think a player can be so frequently involved in goals without having a certain knack. Even if it’s only picking out colleagues who can then fashion opportunities for the team, then that’s still no bad skill to have in your defensive midfielder.

At the opposite end of the spectrum, both Iago Aspas and Glen Johnson are conspicuous by their absence. Yes, both players have an actual assist to their names this season, but the Anfield transfer committee would’ve been hoping for more of an impact from Aspas, and Johnson’s lack of involvement sums up his poor form this season well.

To refer back to the 2010/11 study once again, the England right-back had eight secondary assists that season, and anyone who has seen Johnson regularly this season will vouch for this downturn in contribution.

To finish, a look at how frequently Liverpool’s players have been involved in goals this season. A few notes on the below table…

The assist data is taken from transfermarkt, who include things like winning penalties in their totals; personally I don’t consider that an assist (and neither do sites like WhoScored), but it is goal involvement all the same so I have included them here.

Where players have their ‘extra goal involvement’ in yellow, this is to highlight that the figure is lower than in the table above. In these instances, players have made an earlier contribution to a goal that they then go on to score or assist. For example, Suárez has done this five times, and I think swift one-twos play a part in this.

Finally, the ‘LFC Goals Whilst Playing’ refers to the whole match in which a player appears. If goals are scored whilst they are on the bench, they are still counted as long as they featured in the match at some point. 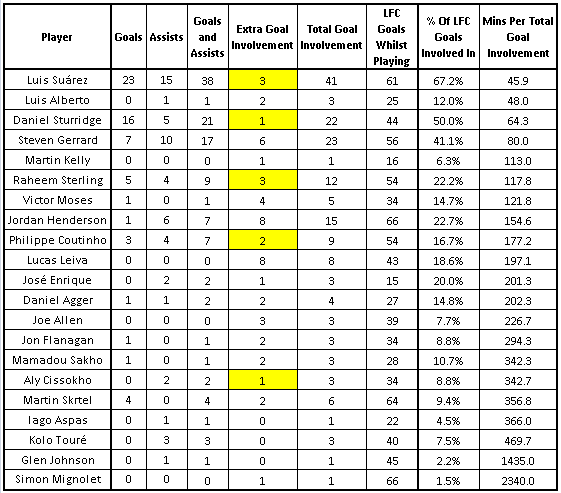 It’s a Luis one-two at the top of the table. It’s no surprise to see Suárez on top of the pile, and Alberto’s cameos have suggested to me that he has good ability on the ball and these figures imply the same.

Suárez’s level of involvement is quite simply phenomenal. Under Paul’s system, Gerrard featured in forty-five of ninety-nine goals in 2008/09, yet the Uruguayan has been involved in two-thirds of the goals in his matches, and who’s to say that his running off the ball (for instance) which wouldn’t be recorded in this system hasn’t helped other goals too? I’d be amazed if it hasn’t.

The figures also highlight (as if it needs pointing out) that Liverpool need more goals from their back two thirds of the pitch. It is encouraging that twenty-one different players have featured in at least one goal to some extent, but the fact that Skrtel is the fourth top scorer if Gerrard’s penalties are excluded does not say much for the Reds’ midfield’s scoring ability.

So it’s a ‘thank goodness’ for the SSS, and a ‘must try harder’ for Johnson and Aspas, with Lucas getting the special commendation. Let’s hope for plenty more goal involvement all round across the remaining twelve games.

The Conundrum That Is Brendan Rodgers