In the recent poll, TTTers were asked What Positions Need Strengthening In January? From 472 votes, these are the results: 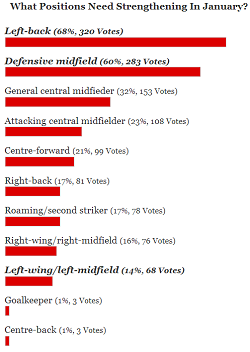 Unsurprisingly, left-back (closely followed by defensive mid) was the position that most TTTers wanted to see strengthened in January.

Using data from WhoScored, I have decided to look at who fits the bill.

A few caveats to the ‘results’ is that the data is for only players with ‘minimum appearances’ which is 10 for the season (and up to 27th December 2013), also the data is only for this season (players from last season can be found here) and I only included players with a WhoScored rating of 7.00 or above.

This filtering misses players that we would almost certainly expect to see in the list. For example Agger and Enrique miss out on two fronts. Not making enough appearances (9 and 8 respectively) and only having ratings of 6.74 and 6.83.