Having secured Luis Suarez to a long-term contract, and with four consecutive league victories under our belt following the 3-1 victory over Cardiff, the feel good factor couldn’t be much higher on the red half of Merseyside as we travel to the City of Manchester Stadium to face Manchester City (17.30 kick off UK time) on Boxing Day.

The Reds sit top of the table at Christmas for the first time since December 2008 but will face our most formidable test of the season at COMS against a team who have smashed 35 goals past eight opponents on home soil in the league – a combined 23 goals scored against five of the teams who currently make up the top eight: Man Utd (4-1), Tottenham (6-0), Newcastle (4-0), Everton (3-1) and Arsenal (6-3) – and have conceded just five in return while picking up 24 points from a possible 24 at home.

Manuel Pellegrini’s side could go on to repeat their title winning success of 2011/12 if they can improve their away form but at home they have been unstoppable this season. Their record at COMS since the 2011/12 season reads:

Our 5-0 hammering of Spurs was our third victory on our travels from eight matches this season and we’ve won three of the last 16 visits to Manchester City, with our last triumph coming during the 2008/09 season when we secured a 3-2 victory. We held City to a 2-2 draw in the corresponding fixture last season thanks to goals from Daniel Sturridge and Steve Gerrard cancelling out Edin Dzeko’s opener before Sergio Aguero levelled matters with 12 minutes remaining. 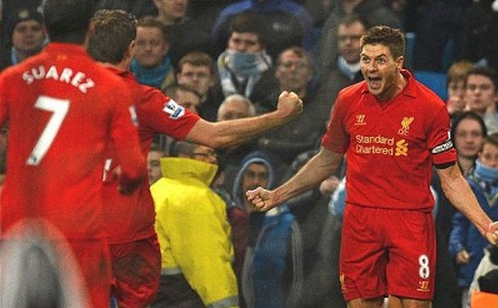