We have frequently debated on this website whether there is a difference in performance between the number of days between games for teams, especially those in European competition. Playing on a Thursday and again on Sunday, as Spurs for example will be doing this season in the Europa League, is surely detrimental to a team’s performance over the course of a season? Whilst we can not analyse the effect of changing the constitution of the team, hopefully the sample sizes are large enough to cover any such effects. (NB Stefan Szymanski is currently undertaking a review of the impact of team changes based on data that I have recently provided, but this is still some way off completion). 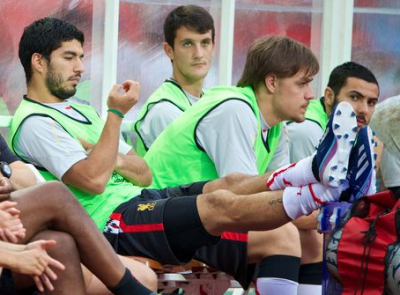 With this in mind, I’ve undertaken a short study to determine whether there is any pattern to results after varying lengths of rest between fixtures and also by comparing the opposition’s length of rest.

The following relates only to English top flight sides since 1992 – but does include European, League Cup and FA Cup matches, as well as league games. (There is simply too much data to expand this in one effort – my poor laptop can’t cope!) It covers almost 9,000 individual matches (or 18,000 teams), but does not take into account the impact of national teams.

Impact on one team – don’t give it a rest!

As its most simple level, we can compare the performance of a team after three, four and seven/eight days (i.e. two, three and six/seven days’ full rest respectively).

Together these three categories account for 67% of the total, the majority of the remainder falling into five and six day rests.

In summary, it seems that there is a small difference between three and four days between games, but seven/eight days produces a worse result.

Impact from venue – home and away

Firstly let us examine whether there is a difference in the result when the team is home or away for each period of rest:

Impact for both teams – a game of two gaps

From this is can be seen that, contrary to what appears logical, the longer the gap between games, the lower the percentage of games won. This happens regardless of venue.

However what we have so far seen is only part of the picture as clearly there will be some impact from the length of time the opposition has had to recover as well. The following table shows the match outcomes for the various combinations of rest days for both teams:

Interestingly, even when one team has an “advantage” in the length of time available to rest, the team with the shorter turnaround time does better on average.

Of course one distorting factor in this is the strength of the team fielded in the domestic cup competitions, so if we now restrict the comparison to matches where the previous game was in Europe, this produces the following:

So, in short, if you’re in Europe, you need more turnaround time, if you’re not in Europe, it doesn’t really matter. So now for the first time, we see an improvement in the performance of the team with a  longer rest, presumably because they have chosen to field strong teams in both matches, whereas in previous comparisons there was an apparent disadvantage.

One further way of examining the data is to see if there is a difference over time. If we split the 21 years of the Premier League into two – 1992-2002 and 2002-2013 – (this roughly represents the time when the Champions League expanded to its current format) we get the following: 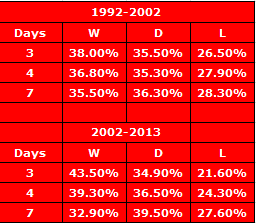 In short – if you are in Europe, the length of rest is largely irrelevant, as your larger squad size should be able to cope. It would therefore seem to suggest that the win percentage is increasing where 3 or 4 days rest between games is available, but decreasing where more time is available. I can see only one reason for this – as we have already seen in Transfer Price Index work, the league is becoming less balanced over time as some teams become richer more rapidly whilst other clubs increase their wealth at a slower rate. As a result richer teams, who will be playing in the Champions League or Europa League will have shorter turnaround times but will have better squads to be able to cope with the rigours of multiple competitions, whereas the “poorer” teams will probably lose to the “richer” teams regardless of the length of lay-off.

Impact on Liverpool – “At the end of a storm” in a tea-cup?

Let’s take one example to see how it has affected a team who has generally been in Europe – Liverpool. The following table includes all games, showing the result after a rest period of 3,4 and 7 days.

There does not seem to be any great difference in results, regardless of whether there are 3,4 or 7 days rest….. over to you!