In the week when it was confirmed that he is actually Stanley Downsouth after a fee for his transfer to West Ham was agreed, we start this week with the strong interest in the guy from The Voice, as Anzhi seek to ‘end their free-spending ways’.

Every UK newspaper and other media besides have carried this story. This is the Liverpool Echo on Aug 15:

Liverpool have contacted Anzhi Makhachkala to express their interest in attacking midfielder Willian. The ECHO understands a bid has yet to be tabled for the Brazil international but the Reds are keen to bring the 25-year-old to Anfield. Willian only joined the Russian big-spenders for £32million from Shakhtar Donetsk in January but they are willing to sell as billionaire owner Suleyman Kerimov looks to cut costs. Liverpool face competition for his signature with Tottenham also understood to be interested. The player’s £100,000 per week wages are a potential stumbling block.

Willian, who has two caps for his country, is a left-sided attacker who has previously indicated his desire to play Premier League football. He started his career at Corinthians in his homeland before moving to Shakhtar for 14million euros in August 2007. He helped them clinch four Ukrainian league titles and the 2009 UEFA Cup before heading for Anzhi earlier this year.

That looks like Bale money to me. Lamela, Eriksen, Willian, Sandro, Paulinho, Soldado would be quite useful. But how would they also keep Capoue, Dembele, Lennon, Defoe, Adebayor, Holtby and Sigurdsson happy?

On Aug 16, Man Utd suddenly appeared on Willian’s trail, so it looks like us v Spurs v Man Utd. 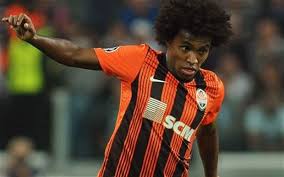 Is the Afro Anfield-bound?