By the time you read this post the data behind it will be out of date. This is always the case with soccer given its global, fast-paced action, but it is perhaps a bigger truism when it comes to player and squad transfer valuations in the middle of a transfer window. Things aren’t made any easier when the transfer window doesn’t close until several weeks into a season, but such realities don’t change the fact that the start of a season demands a forecast.

The last four years of very public research into the role club wage and transfer spend plays in a club’s success has yielded a sliding scale of answers. In general, the shorter the interval of time examined the less of an impact from club spending. Thus, the longer-term trend seen in Soccernomics’ seminal graph showing the significant correlation between average table position versus average multiple of the season average wage bill gives way to greater randomness when applied on a seasonal basis in The Numbers Game. Data from the Transfer Price Index bears out similar results, with the R2 values in the two graphs below showing the seasonal variation being a fair bit higher than the long term trend. 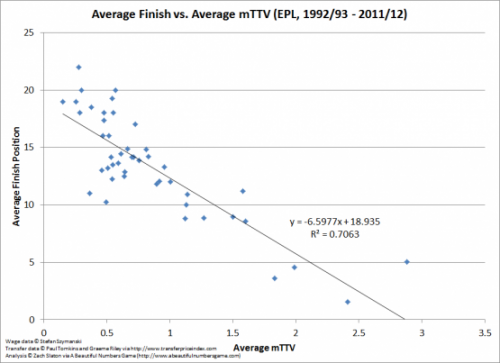 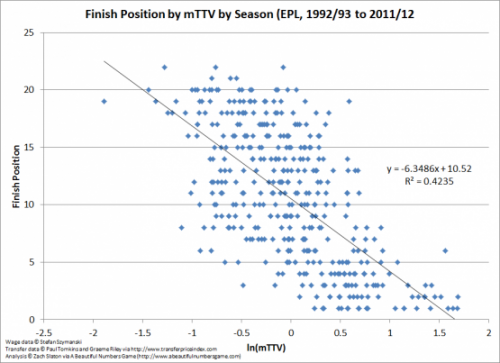 If money has a smaller impact the finer and finer one examines the game, it makes sense to try and understand just how much it might impact on the individual match. This helps contextualise the role non-monetary factors can play in a match, which in turn makes the match less predictable and thus more exciting. The TPI introduced such a model a little over two years ago, used it to make a forecast prior to last season, and readers of These Turbulent Times got a full view of the model’s accuracies and inaccuracies via a retrospective analysis of its performance throughout the 2012/13 season. Like any predictive model used to forecast results at the beginning of the season the TPI’s mSq£R model had a fair bit of error, but it did represent an improvement over prior attempts by the TPI team to forecast results using linear regression models like the graphs above. More importantly, the mSq£R model’s use of individual match results allowed it to be continually updated after each match day. This led the model to quickly converge toward a prediction that had an average error of only 1.3 table positions by mid-season. The model performed well enough that it has returned for a second season with the only changes being the team valuations due to the summer transfer window activity through August 2nd, 2013.

Stats on the ‘Best’ Players in Europe's Top 5 Leagues