Every day, professional writers and amateur bloggers (as well as amateur writers and professional bloggers) write tens of thousands of words analysing every aspect of every level of the game of football. Sadly, most of this writing deals with utterly predictable and uninteresting transfer chatter (which is often the work of an overactive imagination) where the only aim is to rack up hits.

Indeed, the most provocative and stimulating stuff is normally that which deals with topics that aren’t mainstream; articles about or interviews with people who don’t normally attract the spotlight.

In that respect, it is unlikely that anyone will accuse Paul Brown of looking for easy hits. His last two books deal with football in the Victorian era and in some instances they appear to deal with a completely different ball game.

Yet it is definitely the same game, and it is equally unquestionable that these books make for a surprisingly excellent and entertaining read.  For proof, just read the following interview to see how Liverpool’s birth was reported and why the club’s name could have been so different.

PG: First of all, what can you tell us of your last two books?

PB: Well, I’ve edited two volumes of the Goal-Post: Victorian Football anthologies, which are collections of some great football articles by 19th century writers that were actually written at the time that the game was being born and developed. Then I’ve written the Victorian Football Miscellany, which is a big collection of stories, biographies, statistics and all kinds of other stuff from football’s earliest days.

PG: How did your interest in the Victorian era start?

PB: I’d spent a fair of time browsing the archives when working on different articles about football history, and I suppose I became hooked on the idiosyncratic way newspapers and magazines covered the game. I started collecting bits and pieces of writing that I liked, posted a couple on the internet, got some good feedback, and that led to Goal-Post. Then the Miscellany came about because I had accumulated so many little facts and anecdotes, so I’ve tried to put them together in a way that offers a really accessible early history of football.

PG: How popular was football back then?

PB: By the end of the Victorian era it was very popular. Attendances, particularly for cup games, were almost comparable to those of today.  69,000 watched the 1900 FA Cup Final, for example. Of course there was no TV or radio, but newspaper coverage was really popular, and publishers realised they could sell more papers by increasing football coverage. When the FA was formed in 1863, football was way behind cricket (and the likes of pedestrianism and rowing) in the popularity stakes, but by 1900 it was probably the most popular game in the country.

PG: The football writing at the time was spectacularly colourful, wasn’t it?

PB: Yes, there were “clinking” goals and classical references and such like, but what struck me most was the enthusiasm conveyed by the writing. These football writers were advocates for a developing game, and it’s clear that football journalism, particularly at a local level, helped to promote and nurture the game in its earliest years.

PG: Would people going back today be able to recognise the game?  What are some of the most significant differences?

PB: By the end of the Victorian era the game looked much the same as it does today, but if you went back and watched a match in 1863 it would have looked very different. For starters there were no goalkeepers. Any player could catch the ball and set it down for a free kick. There were no corners or penalties, and the original offside law basically outlawed any forward pass. The pitch looked a bit different, too. There were no pitch markings, no crossbars over the posts, and no goalnets.

PG: You’ve obviously done a fair bit of research.  How does it feel to re-discover the birth of important moments in the game such as the penalty kick or the crossbar?

PB: I just find it really interesting. Other researchers have been there before me, and a lot of the facts are available on the web, but to actually go back and read first-hand accounts makes it much more immediate and involving.

PG: How was the birth of Liverpool FC reported?  Was it big news?

PB: It wasn’t particularly big news, to be honest. The Liverpool Mercury covered the dispute between Everton and John Houlding that led to Everton leaving Anfield in its football columns throughout the early part of 1892. Then of course Houlding set up his new club at Anfield, initially also called Everton. The Mercury subsequently refers to the club as “Liverpool (late Everton)”. The formation of the club, and election of officials, was reported in March 1892. But there wasn’t a great fuss made, presumably because it wasn’t anticipated that the new club would be so successful.

PG: Why is it that so many clubs of the time eventually decided to change their name?

PB: In most cases it was because the clubs started out as works teams and later changed their names to be more inclusive. So Newton Heath Lancashire and Yorkshire Railway FC became Manchester United, for example. Others were initially attached to churches and other organisations, and some moved location, so it made sense to change their names once they became settled. Of course Liverpool changed its name from Everton FC and Athletic Grounds Ltd when the football authorities quite understandably told John Houlding that he couldn’t register another team called Everton!

PG: What’s in the future for you?

PB: There’ll be one more Victorian football book, concentrating on the birth of my own team, Newcastle. Then there’s a revised edition of my Unofficial Football World Champions book coming out to coincide with the World Cup, plus plenty of other stuff in the pipeline. So I’ll gradually be returning to modern football, but I’ll be continuing to revisit Victorian football by regularly posting stuff at the website www.victorianfootball.co.uk, which readers are welcome to visit for more stories and images from football’s formative years.

Paul Brown is the author of The Victorian Football Miscellany and the editor of Goal-Post: Victorian Football. He writes about football for FourFourTwo, The Blizzard and When Saturday Comes. His website is www.stuffbypaulbrown.com and he is @paulbrownUK on Twitter 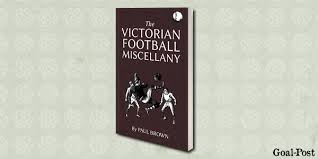 Where Are They Now? No.1 - Victor Palsson