What better way to start the week than with a Merseyside derby? “Liverpool will attempt to beat Everton boss Roberto Martinez to the capture of Wigan striker Arouna Kone, 29, by making a bid for the Ivory Coast international. Kone has a £6.5m release clause in his contract.”

A link that appears to be gaining ground is with Sevilla’s Luis Alberto. According to 101 Great Goals on June 10:

Spanish website Diario de Sevilla report today that Liverpool’s offensive for Sevilla attacker Luis Alberto has begun. At the end of May, there were strong rumours, led by Sky Sports pundit Guillem Balague that Luis Alberto was set to sign for Liverpool. The highly-rated Spanish attacking player spent last season on loan at Barcelona B but has since returned to Sevilla who are weighing up their options on the player. Liverpool have agreed personal terms with the representatives of Luis Alberto, according to Diario de Sevilla who also suggest the Premier League side have settled on a four-year contract. Luis Alberto is quoted in the Spanish media today saying: “It would be foolish & deluded for me to say no to a club like Liverpool.” Sevilla president José María del Nido is now weighing up Liverpool’s opening 8 million euro bid for Luis Alberto but is worried about losing a highly-rated up-and-coming player. The La Liga side, suggest Diario de Sevilla, would accept a Liverpool bid of 9.5 million euros for Luis Alberto. A resolution to this transfer saga is now expected sometime this week.The 20-year-old attacker fits the mould of players being brought in by Liverpool boss Brendan Rodgers. Luis Alberto is young, hungry to prove himself and vastly talented. In 2012/2013, Luis Alberto scored 11 goals and provided 17 assists in 37 games (32 starts) with Barcelona B. 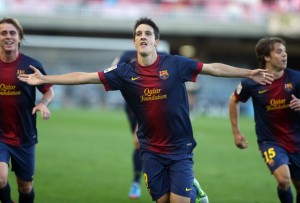 The Liverpool Echo of June 11 suggested Liverpool have three immediate transfers in the offing:

Liverpool FC boss Brendan Rodgers has admitted Liverpool cannot afford to make mistakes in the transfer market this summer if they are to become credible top-four contenders. And will add Celta Vigo forward Iago Aspas to his ranks today, with Schalke’s Kyriakos Papadopoulos and Sevilla winger Luis Alberto following suit.

Sami Hyppia’s Bayer Leverkusen “are ready to battle with Liverpool for highly-rated Ajax and Belgium defender Toby Alderweireld“, according to TalkSPORT on June 10:

The 24-year-old, who is contracted to Ajax until next summer, is believed to be one of Brendan Rodgers’ key transfer priorities as he bids to overhaul the Reds’ backline. Although Kolo Toure will join the club on a free transfer, Rodgers is keen to snap up younger centre-backs and Alderweireld fits the bill. But the Northern Irishman will face stiff competition from Bundesliga giants Bayer Leverkusen. Bayer’s sporting director Rudi Völler was in Brussels last Friday to keep an eye on the defender during Belgium’s 2-1 win over Serbia. And the former Germany international is likely to step up his interest with a concrete bid – and that could force Rodgers to show his hand in the coming weeks.

Well Sami should know what it takes to be a central defender.

Same story, same day, and Express.co.uk say Alderweireld is a Liverpool and Tottenham target and valued at around £8 million. The player has admitted he is attracted at the prospect of playing in England. Or Germany.

Liverpool have been linked with the Dutch centre-back as they bid to bring in defensive additions this summer, while Tottenham have looked at the 24-year-old as a potential replacement for the departing William Gallas. And despite interest from Russia and Portgual, Alderweireld wants to make his next move to a club in England or Germany.

“That is not my preference,” he told Dutch newspaper De Telegraaf. “England and Germany are the best leagues where I think I can take the next step. I have to go somewhere where I can play football a bit and where my style of play suits.  On the other hand, I do not want to play for a team at the bottom of their league. I want to leave Ajax for a nice club, otherwise I’ll just stay in Amsterdam.”

Liverpool FC may be a lot of things to a lot of people, but ‘a nice club’?

Now back to Sami again; TalkSPORT claimed on June 10 he’s after another of our stated targets (see May’s T6):

Bayer Leverkusen are lining up a move for Liverpool target Martin Montoya. The Barcelona right-back is highly rated in Spain but has played second fiddle to Dani Alves since breaking into the first team squad in 2011. But with just one year left on his current deal, clubs are circling and could tempt him away from Camp Nou with a promise of more regular first-team football. Liverpool hold a long-standing interest in the 22-year-old, who has started just 14 La Liga games in the past two years.