Let’s start with that rarest of species – some actual transfer news. Two players seem on their way in, Kolo Touré from Manchester City and close behind him Celta Vigo striker Iago Aspas, 25 – unless The Daily Mail, Daily Mirror, Daily Express, Daily Telegraph, Sky Sports and the Liverpool Echo on May 30 were all wrong. The Echo said:

“Liverpool FC have agreed a fee of 9million euros (£7.7million) with Celta Vigo for the transfer of forward Iago Aspas. The 25-year-old Spaniard has scored 12 goals in 33 appearances in La Liga this season. The ECHO revealed last weekend that the Reds had opened talks about a move to Anfield and the negotiations have reached a swift conclusion. Aspas will remain with relegation-threatened Celta for their crunch final game of the campaign at home to Espanyol on Saturday. They must win in order to have any chance of staying up. He is then expected to fly to Merseyside next week to discuss personal terms and under a medical. Aspas had a buyout clause of 10 million euros (£8.5million) which would have dropped to 7million euros if Celta went down. However, with the likes of Valencia and Swansea City also chasing him, Liverpool moved quickly to secure his services. Equally at home leading the line, playing as a second striker or in a wider role, his versatility makes him a good fit for Brendan Rodgers’ system. The manager had wanted a fourth striking option to complement Luis Suarez, Daniel Sturridge and Fabio Borini and improve the depth of his squad. Livepool have had the 5ft 9ins frontman, who is a product of Celta Vigo’s Academy, watched frequently this season and the reports have been glowing. He netted a career-best 29 goals to help Celta win promotion back to Spain’s top flight in 2011/12.This season he has been the star performer in a struggling side with six assists to go with his 12 league goals. Blessed with good pace and fiercely committed, he is also a clinical finisher.” 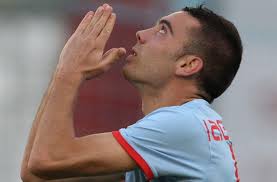 Please, please let it go through … Aspas could be our next temperamental striker

Seems like we’re going to miss out on Christian Eriksen of Ajax though, as he appears Dortmund-bound, as widely trailed, for £13m, to replace Mario Gotze.

But wait … a day later, and Sportsnewsireland.com say we’re back in: