Liverpool travel to the Madejski Stadium on Saturday – 3pm kick off UK time – where they face bottom side Reading in what will be just the tenth official meeting between the two sides. 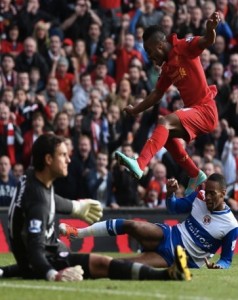 The Reds secured a 1-0 victory at Anfield back in December with Raheem Sterling scoring his first senior goal for the club, which gave Brendan Rodgers his first league win at Anfield as Liverpool manager.

Our last league encounter at the Madejski Stadium ended in a 1-3 defeat back in December 2007. Steven Gerrard equalised Hunt’s opener before two second half goals from Doyle and Harper sealed Reading’s victory, which is their only league triumph over Liverpool to date.

Premier League record since the two clubs met back in October:

Reading are currently on a seven game losing streak in the Premier League – they also lost seven consecutive games earlier in the season – and can lay claim to having lost the most games (19), conceded the most goals (63), kept the fewest clean sheets (three) and have won just five times in the league all season (Q.P.R. have won fewer games with four). Only Wigan Athletic with 32 have conceded more goals at home than Reading’s total of 31 prior to this fixture.

Liverpool have the third best defensive record at home this season with 14 goals conceded in 16 matches, Chelsea with 13 goals against them and Man City with 11 goals conceded boast better records. Manchester City are also the only side to have kept more clean sheets than the Reds with 14 compared to our tally of 12.

The Greatest Ever Liverpool Performance?

Tactics for Beginners - No. 8