Liverpool’s 3-2 victory over Spurs last Sunday saw the Reds claim three consecutive league victories for the first time under Brendan Rodgers and moved us up to 6th place, the highest we’ve been all season. Next up is a trip to St Mary’s to face 16th placed Southampton on Saturday, 3pm kick off UK time. 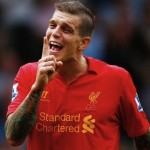 Victory over the Saints would make it four league wins in a row for the first time since January/Feb 2011, when Kenny Dalglish – early into his reign as caretaker manager – secured Premier League victories over Wolves (3-0), Fulham (1-0), Stoke City (2-0) and Chelsea (1-0).

We’ve won one of our last six league visits to St Mary’s – a 1-0 win back in January 2003 – drawing two and losing three but we did claim maximum points in the reverse fixture at Anfield back in December, with Daniel Agger heading in a Glen Johnson cross to ultimately secure a 1-0 win.

Premier League record since the two clubs met at the beginning of December:

Fabio Borini (foot) and Martin Kelly (knee) are both absent for Liverpool.

Danny Fox (hip) is a doubt for the Saints while Steven Davis (illness) has been ruled out.