Since the win at the weekend there has been some talk of finishing in the Champions League places. As Beez mentioned, we currently have an 8.6% chance of finishing 4th (taken from www.sportsclubstats.com). Looking at the site, we could have a 98.1% chance of finishing in the Champions League places if we win our remaining nine games. Looking at our remaining fixtures, it is highly unlikely, but certainly not impossible. 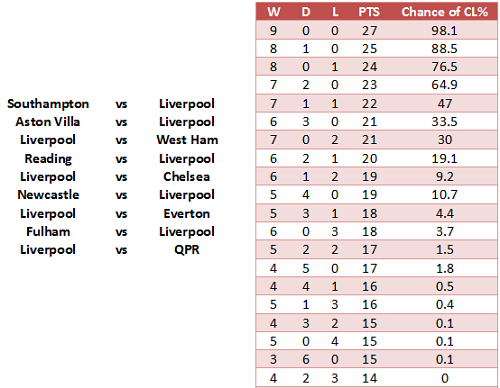 As mentioned it is highly unlikely that we will get these points, but also highly unlikely that at least two of the three teams above us don’t get these points either. To try and get a ‘prediction’ of how the teams challenging for the Champions League places will fare, I have split the league (as it stands on 12th March) into six Tiers and looked at how these teams have performed so far this season against each of the Tiers.

Symposium #12 - Next Year’s Europa Anyone?