Rodgers made only one change from the last game against Wigan. Sturridge returned to fitness and replaced Allen, with the shape reverting to the usual 4-2-3-1. However, Reina was injured so Jones had start in a goal.

For Tottenham, Lennon missed the game. It was always going to be interesting how Villa-Boas chose to replace him. As it played out, Dembele was moved to the right flank with Livermore partnering Parker in the centre. The other two changes (compared to the Arsenal game) were anticipated and part of the usual rotation, pre and post a Europa match. Lloris and Dawson replaced Friedel and Gallas respectively. Bale remained central, which meant Sigurdsson and Dembele were playing in narrow positions off the flanks (something that had certain ramifications on the whole tactical battle). The team’s formation looked the usual 4-2-3-1. But given that on the flanks there were two natural ball-players, playing on their wrong foot (hence looking to come infield), the shape predominantly morphed into a sort of 4-2-2-2. 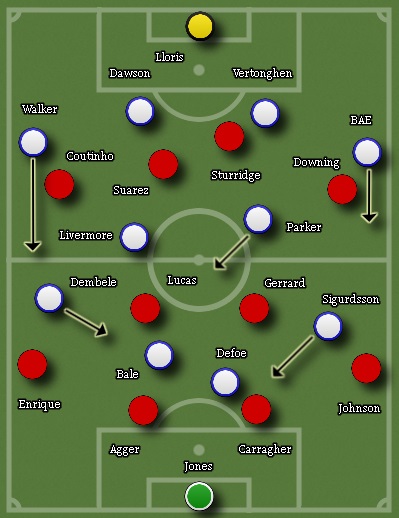 The opening five minutes or so followed the brief of the majority of big clashes this season, with the home team exerting the so-called ‘home pressure’, using a frantic tempo and direct attacks. The only difference was that Liverpool did so for only the first five or six minutes, while usually the team playing at home tend to exert the pressure for ten to twenty minutes.

Liverpool managed to pin Tottenham back by constantly trying to gain territory and construct dangerous moves using quick transitions and direct passes all over the last third. Although some of the moves were promising, they all largely broke down due to the frenetic nature of the passing and movement involved in them. The drastically increased pace in which Liverpool tried to construct these moves were effectively a trade off for better decision-making or a more considered approach to the attacks.

To the opening goal

Still, as soon as the tempo cooled, both teams’ strategies quickly became obvious. Based on this, it was fitting that the team who actually changed the nature of the game and the tempo was Tottenham. In principle they are one of the best and most proactive teams when it comes to changing the tempo during games in order to suit their own needs and aims, not letting the opposition dictate to suit their strategy.

Here the pattern continued. After the initial five minutes, Spurs just got hold of the ball, assertively recycling it in deeper areas in order to kill Liverpool’s opening enthusiasm. There is enough to suggest it was exactly this that bucked the trend, and in this match, the ‘home pressure’ lasted only a few minutes. Meanwhile, by standing off and looking to be compact from around and behind the halfway line, Liverpool effectively signalled what their general strategy would be too.

It could be said that both teams effectively swapped their usual (at least for the last couple of months) strategies. However, this could be easily attributed to the following factors.

For Liverpool, it was obvious that Rodgers was reluctant to leave too much room in the defensive third for Bale and Defoe to hit on the break. To minimise the risk, the manager had his team’s lines closer and more compact to each other. Additionally the defensive line was deeper than usual (but still high enough, not to be labelled as deep-lying). The team still looked to pass the ball out of defence but the back four was allowed that bit more freedom to look for direct passes to the front players. It was notable how Agger and Johnson looked for more longer and cross field passes than usual, while this is something Enrique notoriously tries to do down the left inside channel. The three of them attempted six long passes each. Only Carragher remained focused to pass the ball short, with only one attempted long pass (in the first half when he tried to feed Downing down the right flank). Statistically, Carragher attempted three long passes, but two of them were both sideways. 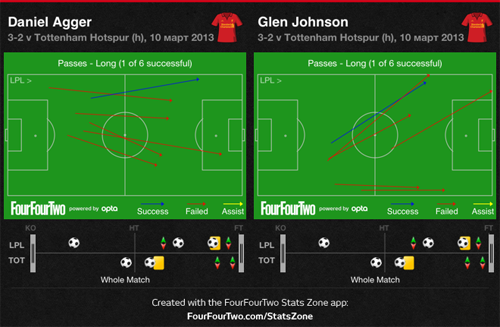 Another key feature of Liverpool’s defensive line was its flexibility. Although it was predominantly a high one, it wasn’t blindly staying higher up (as in the majority of the matches up to now). Several times, mainly when Spurs had possession even in deeper areas, the team’s line remained deeper, staying compact between each line. First, this limited the chance for Spurs to suddenly hit the next gear, using only few passes, before trying to feed Bale or Defoe in the pockets of space left in behind. By staying relatively deep and compact, Liverpool prevented all of this happening.

The second aim is linked with how Liverpool tried to behave in attack during that period. The team was seemingly focused on using quick transitions between the phases, again using as few passes as possible, before sending searching balls into any zone that was left unprotected in Spurs’ defensive third. The deep and compact positioning meant Liverpool indirectly invited Spurs to push up and spread out their shape in possession, hence leaving themselves open at the back. With the visitors not keen to press from higher up the pitch, Liverpool had chance to both execute their standard procedure to recycle from deep, but once the ball was in the midfield zone, try and exploit Spurs’ high defensive line.

The opening goal was the perfect example of how all the parts of Liverpool’s strategy combined to produce the whole move from the build-up to the final touch from Suarez. Spurs were dragged higher up following a throw-in relatively deep in Liverpool’s half. The home team managed to steal the ball, with Johnson then immediately looking to carry the ball forward before sending a cross field pass to Coutinho on the left flank. All of this showed Liverpool’s willingness to be direct and use cross field passes from deep to speed up the transitions and gain territory as quickly as possible. Then with Enrique quickly overlapping on the left flank (another sign of the team looking to be direct as quickly as possible) Liverpool managed, for the first time, to have the chance to gain territory by overloading a certain zone. The full back exchanged a few passes with the winger before weighing a great pass for the onrushing Suarez to score with the outside of his boot. Before that situation there were few chances for Liverpool to break forward quickly with pace, but they failed because the players were too far away from each other to combine. Plus, it should be noted that although Spurs dominated and spent a fair share of their time in Liverpool’s half, their reversed transitions (from attack to defence) looked impressively quick, timed and organised. This helped the team ruin a few good chances for Liverpool to break forward more dangerously, even if initially it seemed the home team would have the advantage, both in terms of numbers and of free spaces.

On the other side with the Lennon injury, Villas-Boas had a few options to replace him. But by choosing to have Dembele on the right, he effectively made the choice to have his team focused more than usual on controlling the match and dictating the tempo by bossing the possession. This, paired with Liverpool’s strategy, made Spurs less capable of threatening on the break, even if Bale remained central behind Defoe.

A Model To Identify Players - A Summary