Between 1991 and 2010, Liverpool averaged a new manager every five years. Of course, in the 32 years before that, the club’s managers on average lasted eight years, but we all know that the increased pressure and spotlight has changed the rules in the modern game. Even so, averaging one manager per year since the end of 2009/10 is, to use a great word, somewhat discombobulating.

Something weird happens when you want stability and success, but can’t find it. In the hunt for the right manager, sackings become a kind of yardstick; i.e. what Manager X got sacked for means that his successor must also suffer the same fate unless he is immediately better. And that’s assuming that the managers were sacked for just their on-pitch performance, and not other contributing factors.

If a manager in whom you were emotionally invested gets sacked then of course it can make it a little bit harder to warm to his successor. That’s human nature. And if a manager you loathe gets sacked, you’ll probably welcome the next one like he’s Bob Paisley reincarnate.

Add the different stances over different owners and their controversial decision making executives, and there’s added agreement or disagreement thrown into the mix. Not everybody questioning Brendan Rodgers is carrying a grudge about Rafa or Kenny, or something else. It is possible for fans to think that he’s just not good enough, without any agenda. The murky area is the question of just what is good enough? That may be where people are getting things wrong. 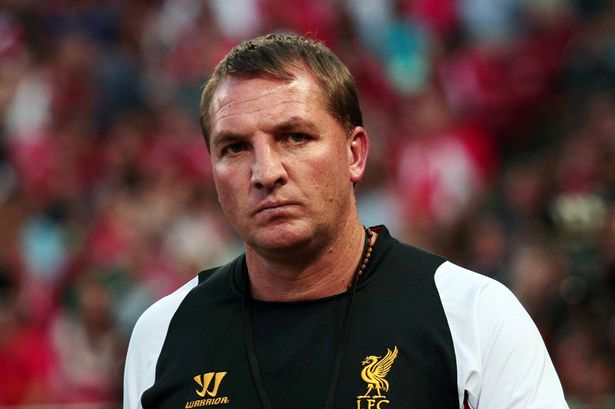 Rodgers’ lack of CV and the absence of a single outstanding result so far this season – the average position of teams beaten is 15th – make it easy for critics to label him a mid-table manager, just as they labelled Jordan Henderson a mid-table player, simply because he came from a mid-table club. By that logic, Gareth Bale is a Championship player and Wayne Rooney is only good enough for a team that averages 6th or 7th in the table. That said, Rodgers’ side have had had at least two dreadful results: losing 3-1 at home to Aston Villa and losing 3-2 at Oldham. Equally, if he’s building something good, we can’t expect it to be ready yet.

People in football are capable of moving up the ladder; they are not defined by the environment in which they made their name. But of course, managers need different skills the higher up the league table they go. Right now, Rodgers seems to possess a lot of the attributes for a big-club manager: progressive style of play, examples of modern thinking that can gain an advantage, and the aura of someone who doesn’t seem overwhelmed (whether or not you like Rodgers or find his personality grating, he doesn’t spend his time looking confused and rubbing his face).

But it’s equally true that he’s got a lot to learn and a lot to prove. Although they’ve all got time on their side (bar Nuri Sahin), Rodgers’ signings are yet to spark into life, with the exception of the first month or two by Joe Allen (before disappearing) and the great impact of Daniel Sturridge. (And even then critics, if they so wished, could point to the fact that the manager refused to take the player in August, which at the time I found a bit strange.) Right now, the majority of Rodgers’ spending sits on the bench or in the stands. That said, Allen and Borini have genuine potential, and could follow Lucas and Henderson as young players who took a year or two to settle in and find their feet.

In training Rodgers focuses more on attacking drills than defending, and that is evident in how good the team are looking going forward and how, if they don’t keep a clean sheet (shut-outs are something they’ve only done against the minnows), his side will concede at least two; according to this site’s Andrew Beasley, goals-per-game is favourably comparable with most Liverpool seasons from the past 20 years, but goals-per-game-against is poor. So far, Liverpool have conceded two against Man United (twice), Man City (twice) Arsenal (twice), Everton and Spurs; i.e. in every game against the top six, bar the fixture at Stamford Bridge (one goal).

The addition of Philippe Coutinho is very exciting, but was the priority yet another tricky little attacker? Just as in the summer the priority wasn’t central midfield (but two of the four arrivals were central midfielders), it could be a criticism labelled at Rodgers that he isn’t addressing the pressing issues, assuming that he had a large say in the matters.

Still, I’ve been a fan of both Coutinho since watching his early Inter games back in 2010, and in all the time watching Liverpool’s youth matches in the past decade or so, Sturridge has been the joint-best opposition player I’ve seen, alongside Jack Wilshire; two kids who looked like men amid boys. Sturridge impressed on loan at Bolton and last season at Chelsea under Villas Boas, so I think that Liverpool have spent £20m very wisely indeed, especially as both players have played for big clubs, meaning they shouldn’t be too scared of the Liverpool shirt. It’s just a question of whether other areas should have been strengthened instead, but with Liverpool unlikely to fall down the table and unlike to move up to the top four, that can wait to the summer.

Rodgers has yet to show that he can strike the balance that good teams need, although it’s still relatively early days, and the Manchester City display yesterday was the most balanced – and impressive – against top opposition yet. Liverpool did well to go to Arsenal and City within four days and get a point from each, although both opposition sides were without at least two of their best players (Arteta, Diaby, Koscielny / Kompany, Yaya Toure), which made it slightly easier, given that Liverpool had no such worries. Even in those circumstances, however, a point is more than acceptable.

Overall I still remain somewhat ambivalent about Brendan Rodgers. I always used to think that ambivalence was a synonym of indifference, but even though the end position might be similarly neutral, it’s because of a strong push and pull as opposed to simply not caring either way.

I know full-well that the right thing to do as a fan is to support the manager. Equally, I know that it’s illogical to support the wrong manager; would Liverpool as a club have been better had it stuck with Souness and Hodgson? The Alex Ferguson argument says that if you don’t give the manager six or seven years to get it together you may accidentally cut loose a great talent. But should every manager get that long? And how do you decide who merits it?

Half of me thinks Brendan Rodgers is what the future of football management looks like. And the other half of me thinks that Brendan Rodgers looks like what we think the future of football management should look like, but where appearances are deceptive. He looks like he could be the real deal, but he’s seven months into his only high-profile, high-pressure job, and, at best, he’s done okay.

On the one hand, I think we’ll never know if Rodgers is the real deal if he’s not given a chance. On the other, I worry that after three years of upheaval, another two or three years without heading to where we want to be is the equivalent of driving down a cul-de-sac. The good news is that, unlike under Roy Hodgson, there won’t be that sense of it being in the wrong direction. Rodgers isn’t going to drive the team off a cliff.

The former Swansea man may not get us to where we want to be (who can say?), but I’m pretty sure he’s not going to fill the side with ageing yard-dogs and brutish cloggers, and leave the best players disillusioned. Indeed, Suarez, Agger, Johnson and Gerrard seem very happy under the Ulsterman. They are performing at a high level and are being managed in fitness terms through a reduced training load rather than rotation, which means they don’t have to get the sulks on the bench. It seems to be working, although the final stretch of the season is often were tiredness sets in, and we’re not there yet. And as the squad gets bigger, can he keep everyone happy? Again, we’re not there yet.

Rodgers’ general philosophy feels right, and when the Reds’ game clicks it looks exciting, but there are still some major issues, such as the failure to cope with any side that is physical in size or energetic in its pressing (i.e. Liverpool have only really beaten minnows who don’t press; anyone else has found it too easy); the failure thus far to beat a decent team (although the majority of those games have been away, and a couple of the games were drawn due to individual errors); the apparent frequent failure to take the opposition’s strengths into question; and whether or not his idealistic approach fails to leave room for enough pragmatism, which at times may be necessary.

But we’ll see. It’s wrong to expect too much change within seven or eight months. However, the great tension from fans seems hinge around what we have a right to expect. Until Rodgers achieves something notable at Liverpool, there’s a section of the fan-base he will not win over. Equally, we can’t say that he won’t achieve anything based on his record to date, otherwise no manager would ever work his way up the ladder.

What follows is an examination of what I see as the pros and cons of Rodgers’ management so far, delivered, I hope, without prejudice.

The second half of this post is for Subscribers only.

Can Liverpool Still Make the Top 4?