Mancini continued to start with the 4-4-2 (with split forwards) formation. With the return of Nastasic to full fitness, City’s selection didn’t spring any surprises. Javi Garcia was moved into midfield to accommodate Nastasic at the back, Silva and Milner played on the flanks. The only real dilemma for Mancini was would who start up front. Due to his current goal-scoring form, Dzeko was preferred to spearhead the attack with the more mobile Aguero behind him and Tevez on the bench.

For Liverpool, Rodgers made two changes following the Arsenal game. One was a change in personnel – Enrique, now fully fit, replaced Wisdom (meaning he and Johnson could play on their natural sides). The other change was tactical – Henderson started on the flank with Suarez through the middle (at Arsenal it was the other way around).

The teams’ shapes were nearly identical. Broadly speaking, both teams had progressive full backs on each side, two midfielders, wide players providing diversity (Silva and Henderson being deep and narrow, with Milner and Downing remaining high and wide) and split forwards up front.

But there was a subtle but important difference in how the secondary forwards, Aguero and Suarez, acted. The Argentinian was more of a proper second forward, starting higher up and looking to drift wider but rarely dropping deep to influence the midfield battle. The Uruguayan’s starting position was deeper – he was effectively placed in the hole, behind Sturridge – and although he rarely influenced the midfield battle directly, his deeper position did have an impact (more on this later).

On a side note it was good to see Rodgers taking into account Silva’s presence. Lucas was moved to the right of the centre slot with Gerrard to the left in order to confront Silva and stop him having a bigger influence, when moving from the left flank. 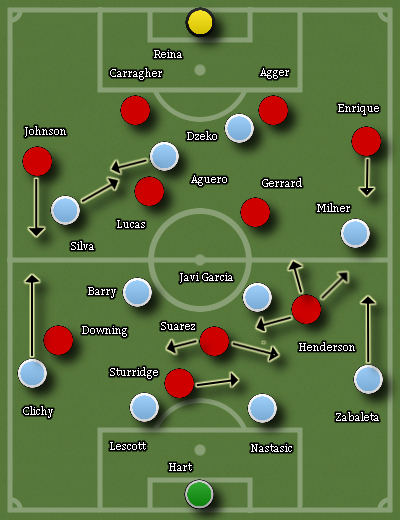