Rodgers made the surprising decision to replace the injured Sturridge with Shelvey. This meant Suarez occupingy the centre forward position with Shelvey as the attacking midfielder behind him. Everything else was the same as in the previous game against City. Liverpool continued with the lopsided 4-2-3-1.

For West Brom, Clarke had the boost of recalling Mulumbu to the side. With him fit again, WBA had their usual double pivot alongside Yacob. Clarke preferred to start with a three-man midfield, meaning a sort of 4-2-1-3 shape. Morrison was just ahead of the holders, with Brunt and Dorrans unsurprisingly briefed to play disciplined roles on the flanks. Up front Clarke chose Long, continuing a trend to have him starting the matches, tire down the opposition’s defenders and then bring on Lukuku to physically dominate them. 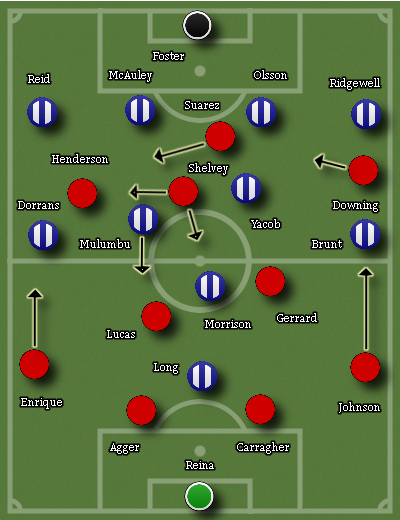 Given how the match started and the whole tactical battle that unfolded throughout, it’s imperative to first touch on WBA’s game plan.

The match opened with a period of around ten minutes where it was the away team largely dominating proceedings. During that opening few minutes it became clear what Clarke planned in terms of his team’s ‘in possession’ behaviour.

It was rather surprising to see WBA having more of the ball in that spell, and equally surprising to see them being calm and confident in possession and just working the ball around. Their shape, especially the presence of three midfielders, greatly helped on that front. With the deep presence of Yacob and Mulumbu, WBA had numbers and confidence they were going to bypass any pressing wave and build their way high up the pitch. With Morrison just ahead (hence acting as a proper third midfielder, not second forward) and the wingers coming narrow, WBA had the numerous passing outlets to pass the ball around, slow the tempo and gradually move into Liverpool’s half and even defensive third.