While a big freeze has been hitting hard in parts of England, the race for 4th place is heating up nicely as Liverpool (7th) travel to the Emirates to face Arsenal (6th) on Wednesday evening (7.45pm kick off). Both clubs hold ambitions – with varying degrees of reality – of finishing in the top four, but with Arsenal three points above us, defeat needs to be avoided to prevent the gap between us and the teams above – especially 4th placed Spurs who face Norwich – from widening. 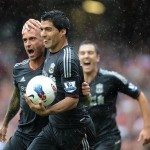 Liverpool won the corresponding fixture last season 2-0 thanks to an own goal from Aaron Ramsey and a strike from Luis Suarez. It was our first league victory on Arsenal’s home turf since the turn of the millennium and it’s our only win in the Premier League against the Gunners in our last 11 matches home and away.

Since we suffered a 0-2 defeat to Arsenal at Anfield back in September, the two sides share a similar record in the Premier League although Liverpool have gained one point more and kept more clean sheets – nine compared to four – than Arsene Wenger’s side.

Premier League record since the two clubs met at the beginning of September:

Jose Enrique (hamstring), Martin Kelly (knee), Jon Flanagan and Pepe Reina (thigh) are missing through injury for Liverpool, while Oussama Assaidi is still at the Africa Cup of Nations with Morocco.

Arsenal are missing Lukasz Fabianski (foot) and Francis Coquelin (hamstring) and have doubts over Mikel Arteta (calf) and Thomas Vermaelen (foot). Gervinho is at the Africa Cup of Nations with the Ivory Coast.

TTT Symposium #5 – How Should We Treat the FA Cup?