Both managers made some surprising decisions. For Liverpool, Rodgers selected Henderson on the left flank, in a very narrow role within what was a lopsided 4-2-3-1 shape. Because Reina’s clash with Kagawa in the previous match was more serious than first thought, the Spaniard had to undergo some nose surgery – so Jones started here instead. The other main surprise was to see Skrtel benched and Carragher starting. The rest was more or less as expected – Suarez playing just off Sturridge, Gerrard alongside Lucas in midfield and Wisdom continuing at right back.

However, the most surprising decisions came from Hughton. He continued with his preferred 4-4-1-1 formation but two of his most influential players – Hoolahan and Pilkington – were left on the bench, replaced by Howson and Elliot Bennett respectively. The manager probably wanted more functional rather than creative and attacking-oriented players on the pitch. Nevertheless, not to use two of your key players was a big surprise. In the meantime Bassong was injured, so Ryan Bennett partnered Turner in defence. 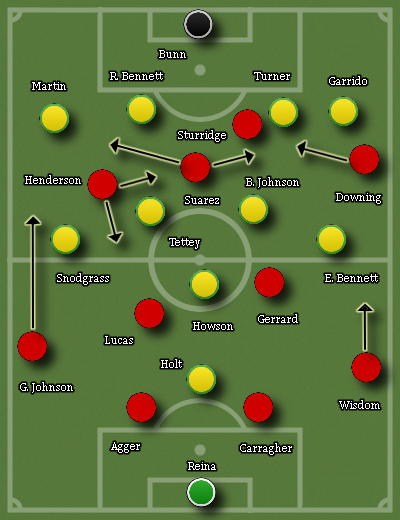 The match was not only a one sided-affair, but there wasn’t even an inch of tactical progress during the whole match. Logically the main focus would fall on the team that not only won convincingly, but dominated during the whole game – Liverpool.

Structure of passing and movement

In this match, Norwich’s behaviour was similar to Sunderland’s in our previous home clash at Anfield. Like Sunderland, Norwich largely dropped in deep and narrow and with an overly passive 4-4-1-1 shape. Again, like against Sunderland, this meant Liverpool had all the time and space to initiate their deep recycling process and gradually move higher up the pitch, transitioning between the phases and spreading out their formation.

Here, it was again evident that whenever Liverpool started their passing out from defence, Lucas dropped near the centre-backs, who in turn moved wider. Then as soon the team started to move higher up the pitch as a whole, the centre-backs drifted wider and higher up as well. The passing chalkboards of Agger and Carragher are the perfect illustration of this. See the gradual morphing of their passes from deep and narrow to advanced and wider are: 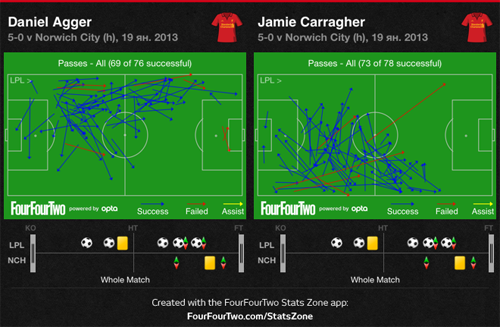 On the flanks, the full backs pushed forward to serve as the wide outlets – with Johnson surging that bit higher up the pitch (more on this later). This, coupled with Gerrard always staying ahead of Lucas, led to Liverpool always having those clear forward-oriented passing routes. The ball could be passed into them and be moved gradually higher up the pitch. Similar to the way Agger and Carragher behaved on the ball, here we can see how the zones where Lucas and Gerrard received the ball were deeper, before gradually moving forward. As a result they occupied the whole vertical stretch of the midfield area – starting from just ahead of the centre-backs (the defensive third) then almost reaching the final third. With the duo always on the move, it’s also evident that both players covered the width of the pitch too. For example, when Lucas came deep and central towards the centre-backs, Gerrard tried to go to the left or to the right of him, opening not only a clear passing route but an angled passing route (which is always harder to be stopped in comparison with the straight, vertical, passing path). 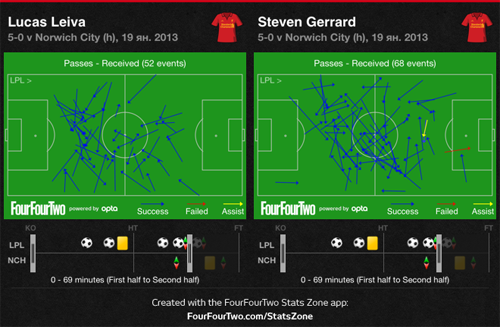 Where this match and the previous against Sunderland differed was the set-up of the front four unit. Against Sunderland, Downing and Sterling were on their natural sides, providing the width, with Henderson the player nearest Suarez. Here it was drastically different.

With Henderson nominally playing as the furthest left of the quartet, but in reality being tucked in centrally, Liverpool were in position to create a midfield diamond. Lucas always remained deepest in relation to his midfield partners’ positions, even when the team were deep in Norwich’s half and he was also higher up the pitch. Suarez – as was to be expected – remained the most advanced, always roaming and floating between the lines and down the channels. Meanwhile, Gerrard was the in-between player coming from deep, while Henderson, due to his narrow position, was the secondary “in-between” player but coming from higher up the pitch. All of this created a passing web, full of passing angles and possibilities.

What was good to see was that this midfield diamond didn’t overlap in their behaviour, on or off the ball. The four players were completely different to each other, which resulted in a nice diversity, with a fluid and complementing nature. Lucas was the calmer, recycling passer who glued the team from deep. His passes were more “vertical” than usual, but with Norwich leaving him so much space and time on the ball, it was only natural that he would be much more forward-thinking in his passes. Coming off the flank and from higher up, Henderson’s energetic and quick, short passing style was the other factor complementing the team; helping it to just move the ball around with the required intensity and overwhelming presence in advanced areas. 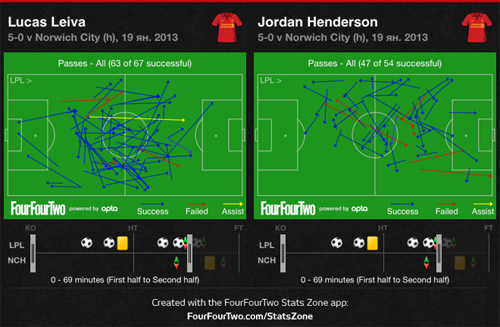