Daniel Sturridge – a Quick Low Down

Daniel Sturridge – a Quick Low Down

So £12m sees the 23 year old Birmingham-born striker heading for Anfield – and his first reported comment is very promising:

“Brendan Rodgers said he sees me here for a long time – and I also see myself here for a long time. I’ve not signed here to play for a couple of years and then move on. I’ve signed to be here for as long as possible. It’s a humongous club – for me, one of the biggest in the world – and to have the fans and world-class players we have here is amazing.”

Sturridge comes from a footballing family, as he is the nephew of former football strikers Simon Sturridge and Dean Sturridge. He joined Manchester City’s youth academy in 2003, aged 13, and made his first appearance in the first team  in 2006/7, where he saw a whole 20 minutes action. His first senior goal came the season after, on 27th January 2008 in an FA Cup match against Sheffield United, followed three days later by his first league goal, the equaliser in a 1-1 draw at Derby County. City won the 2007/8 FA Youth Cup, with Sturridge the leading scorer in the competition, scoring in the first leg of the final, thus becoming the only player ever to score in the Youth FA Cup, the FA Cup and the Premier League in the same season.

At the end of the 2008–09 season, Sturridge was voted Young Player of the Season by City’s fans. Under Mark Hughes’ management he was reluctantly transferred from Man City to Chelsea on June 30th 2009, with the fee decided by a tribunal. Chelsea paid an initial fee of £3.5 million, with additional payments of £500,000 after each of 10, 20, 30 and 40 first-team competitive appearances. There would also be a further payment of £1 million if Sturridge made a full international appearance – which he has – and Manchester City in addition would receive 15 percent of any sell-on fee if Sturridge was transferred – which he also now has been, so we presume 15% of £12m is now heading towards Eastlands. To be regarded by the Sheikh the same way as I regard 1 and 2 p pieces in my wallet.

He was loaned to Bolton on the last day of the 2011 transfer window, where his 8 goals in 12 appearances represent his most prolific spell so far.

He has seen trophies whilst with Chelsea – the 2009/10 PL title, FA Cup and Community Shield, and regrettably the 2012 FA Cup! Oh, and the 2012 Champions League, where he was an unused sub.

In total he’s scored 38 goals in 140 appearances in all competitions, as well as 15 assists – not too shabby, but not the record of a fox in the box type striker either. But then that’s not what he is. He’s mobile, quick and can play as a wide striker, though his preference for playing centrally is well recorded, as the man himself Sturridge “I do still see myself as a striker but I am doing a job for the team and I’m enjoying doing it”.

“He is an extremely quick player, and he has technique at pace. You get plenty of pacy players, but what is important is that he arrives with the ball, he can control it and do something with it. That is what he offers.

Daniel offers a few of the characteristics I had with Hulk when I was with him in Porto… He is an extremely quick player, and he has technique at pace.”

Sturridge has represented England at all levels from under-16 to senior. He made 15 appearances and scored four goals for the under-21s, and made his full England debut against Sweden on 15 November 2011 as a second half substitute for Theo Walcott. His second appearance came against the Netherlands as a first half sub for the injured Steven Gerrard. He caused the Dutch defence problems throughout the match and won the man of the match award.

Sturridge also played for the Team UK under 23s in the 2012 London Olympics against Senegal, UAE, Uruguay and South Korea, scoring against UAE and Uruguay (from an assist by Joe Allen!). He also missed the decisive penalty in Great Britain’s shoot-out defeat against South Korea! 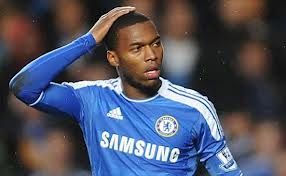