Liverpool begin a busy and tough looking run of fixtures over the next month or so with a Boxing Day visit to Stoke to take on Tony Pulis’ side, 7.45pm kick off UK time. The Reds play four matches in the space of 12 days over the Christmas/New Year period, with three of those matches played away from Anfield (Stoke, Q.P.R. and Mansfield).

Looking at what lies ahead – six of our next eight fixtures are away from home, including league trips to face Manchester Utd, Arsenal and Manchester City – we need to build on the 4-0 win over Fulham with positive results against the likes of Stoke, Q.P.R. and Sunderland in the league, as well as avoiding an embarrassing exit at the hands of Mansfield in the FA Cup 3rd Round. 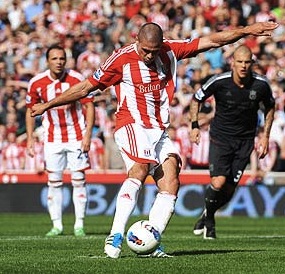 The corresponding fixture last season ended with a 0-1 defeat for Liverpool courtesy of a Jonathan Walters penalty. The Reds have yet to win at the Britannia Stadium in the Premier League in four attempts, recording two draws and two defeats, while the two club played out a 0-0 draw earlier in the season at Anfield, leaving Liverpool with just two wins from our previous nine meetings with Stoke in the league home and away.

Liverpool currently sit in 8th place with 25 points, one place above Stoke who have the same number of points but a slightly inferior goal difference (+2 compared to Liverpool’s +4).

Martin Kelly (knee) and Fabio Borini (foot) are both ruled out for Liverpool while Oussama Assaidi (knee) is a doubt.