There were few changes for either team. Enrique was fit to start but – as hinted in the days before the match – Allen and Sterling were rested. So Suso started on the left and Downing on the right flank with Shelvey in the hole. Liverpool reverted to the 4-2-3-1 shape.

For Fulham Jol had some minor injury crisis, aided by a ban for one of his important midfielders, Sidwell. Duff and Petric attained injuries in the days before the match but at least Riether was fit to start. As a result Jol kept the back four unchanged, with the veteran Karagounis joining Baird in midfield. On the flanks Dejagah replaced Duff on the right with Kacaniklic starting on the left. Meantime Richardson kept his starting place but was used through the middle in Fulham’s 4-4-1-1 as Jol went for the shape he used previously away to Chelsea. 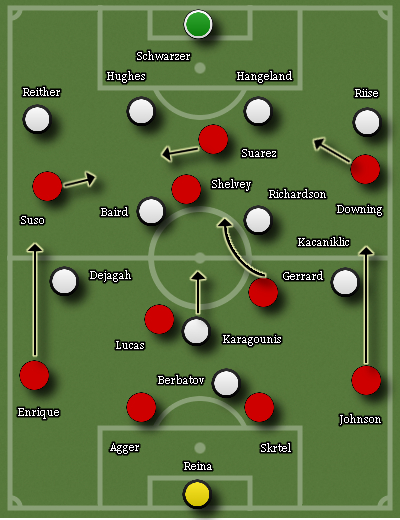 The match went with Liverpool having total tactical and technical dominance, with a brief exception of a several minutes around the hour mark. But before starting to examine the home team’s dominance and what caused it, let’s cast our focus on the opposition.