Liverpool’s eight game unbeaten run in the league came to an end at White Hart Lane on Wednesday evening with a 1-2 loss to Tottenham Hotspur. Next up for Brendan Rodgers’ side is a home match against Nigel Adkins’ Southampton, 3pm kick off UK time.

Southampton are embarking on a four game unbeaten run – two draws, two wins – after having started their first season in the Premier League since 2004/05 with eight defeats in their first ten games. The Saints have won one of their previous six league games away from home this campaign – a 3-1 victory over Queens Park Rangers – while Liverpool have won just two of their seven league games at Anfield this season; a 1-0 victory over Reading and a 3-0 triumph over Wigan Athletic. 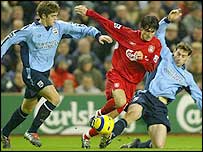 The last time the two sides met at Anfield in December 2004, Liverpool secured a 1-0 win thanks to a goal from Florent Sinama-Pongolle. That victory was our seventh in our last 13 meetings against the Saints at Anfield, suffering two defeats and four draws.

The match officials for this fixture are:

Fabio Borini (foot), Lucas (thigh) and Martin Kelly (knee) are all ruled out for Liverpool.

The First Time I Ever Saw The Reds - No 2