Liverpool are back in Premier League action following the international break with a home clash against Brian McDermott’s Reading (Saturday 3pm kick off UK time). The Reds kept their first clean sheet in the league against Stoke City but couldn’t secure a first home win in the Premier League of 2012/13 with the match finishing 0-0. 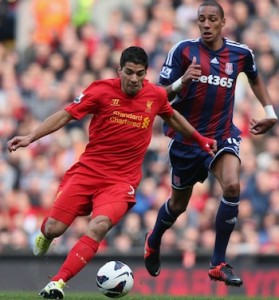 That goalless draw with the Potters means our home record remains badly in need of improving. We’ve yet to win from four league encounters at Anfield this season and going further back to last season, our home record stands at six wins from 23 matches.

There have only been eight official games between the two sides, with all eight played following Reading’s first ever taste of top flight football in 2006, with four of those encounters coming in the Premier League. The Reds met Reading twice in the League Cup 3rd round stage in consecutive seasons: 2006/07 (won 4-3) and 2007/08 (won 4-2). Liverpool then met Reading in the 3rd round of the FA Cup in 2010, drawing the first game at the Madejski Stadium 1-1 before losing the replay at Anfield 1-2.

The last league meeting at Anfield saw Liverpool seal a 2-1 victory thanks to goals from Javier Mascherano and Fernando Torres.

Fabio Borini (foot), Martin Kelly (knee) and Lucas (thigh) are all ruled out for Liverpool, while Pepe Reina (hamstring) and Jose Enrique (knee) are both doubtful.

Who's The Ref? - How the Officials Treat Liverpool