There wasn’t anything surprising or not anticipated in either team’s selections. Moyes opted to keep the Neville-Osman midfield duo, which meant Naismith was to play on the flank. The slight surprise was that he played on the right, which moved Mirallas to the left where the suspended Pienaar normally plays. Moyes probably wanted a speedy, tricky, more direct attacking player up against Wisdom. Rodgers himself named the expected XI with only two changes – Suso and Sterling swapped flanks, as rumoured, while with Johnson injured Enrique logically started. Everything else was as expected.

As expected, Everton lined-up with 4-4-1-1 (which in attack turned into 4-4-2 as Fellaini was playing more as a second forward rather than a third midfielder), while Rodgers continued with his 4-2-3-1, which in this match looked even more like a 4-2-1-3 given Sahin’s deeper role and the fact he was closer to the double pivot rather than the front trio.

However, there was one subtle – but still very important – change from Rodgers. Previously it was Gerrard who played on the right of the central duo while here it was Allen. Allen wasn’t played totally right oriented – he was still playing central role – but with Gerrard stationed left it was Allen who was closer to Everton’s right flank. Obviously Rodgers wanted the more disciplined and defensively capable player to be in position to cover. The problem was that Allen was forced to execute two defensive roles and one additional – when the team was trying to transition. There were times when he executed every of his three supposed roles well enough but as you might expect,  sometimes he struggled  to combine two (if not all three) of them simultaneously with the desired effect. But more on this later. 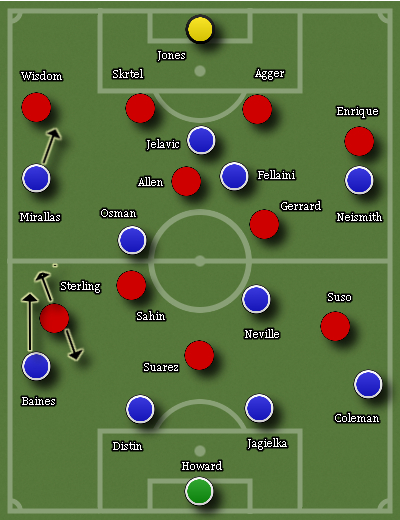