Liverpool will be hoping to avoid a Halloween horror show against Brendan Rodgers’ former side Swansea City at Anfield on Wednesday evening (8pm kick off UK time). The Capital One Cup 4th round tie at Anfield will be the first time Rodgers will face his former side, now managed by Michael Laudrup, since he left the Swans for Anfield during the summer. 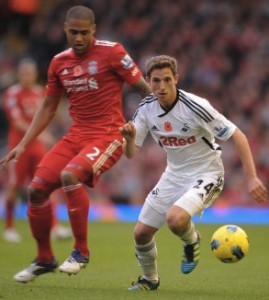 The two sides have met just once previously in this competition, way back in 1968 at the 3rd round stage. Liverpool, managed by Bill Shankly, secured a 2-0 victory at Anfield courtesy of goals from Chris Lawler and Roger Hunt. The Reds only got as far as the 4th round stage of the competition that year, losing 1-2 against Arsenal at Highbury.

A youthful Reds side overcame West Bromwich Albion 2-1 at the Hawthorns in the 3rd round while Swansea defeated Barnsley 3-1 (2nd round) and Crawley Town 3-2 (3rd round) en-route to reaching the 4th round stage.