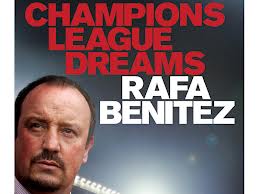 The day after it was announced that Rafa Benitez had left Liverpool, I came across an acquaintance – a long time Liverpool fan – who surprised me by saying “don’t tell me you’re sad to see him go! Benitez ruined Liverpool.”

It was a reaction that took me aback. Naturally I was conscious that there were many fans who wanted to see the back of Benitez and thought that he wasn’t the one to take the club forward, but it had never occurred to me that there might be people who felt that he had ‘ruined’ Liverpool FC.

Two years have passed since his dismissal and fans – including a good portion of those who wanted him out – are looking much more positively at his time at the club.  Time, and the failure to get anywhere near a Champions League spot in the meantime, has enhanced his reputation to the extent that when Kenny Dalglish was dismissed there were many who clamoured for his return.

If there is a positive side-effect of that demand not being met, it probably lies in the fact that he got to finish writing Champions League Dreams.

As the title suggests, the bulk of the focus of this book is on the Champions League and how Benitez managed to do so well in this competition.  There are insights, explanations and tactical talks as he explains in detail every game that his team played.  He explains how the much maligned zonal marking system was often, in fact, altered to man-mark individual players.  And he explains in detail why he took certain decisions, the formation for the final against AC Milan in 2007 being the main one.  It is all incredibly fascinating and a true learning experience.

Benitez also talks about the lead-up to certain decisions.  One such instance is the decision to sign Fernando Torres after a list of strikers had been drawn up. Another deals with what led to the failure to sign Simao Sabrosa.  Both put light on previously unknown details and there are plenty more such instances. Yet do not expect any criticism of the people that many feel let him down during his time at Liverpool – the likes of Hicks and Gillett or Christian Purslow – and although they do get mentioned it is often cursory.  Nor does he talk about the split with Pako Ayesteran. The impression is that he feels that such matters have little place in a book about football.

Although unwittingly, he also highlights his own genius when, for instance, he explains that in 2005 he started the game against Juventus with the players instructed to adopt a tactical shape for the first few minutes and then changing it hoping to gain an advantage when his opponents didn’t react to that change.

Indeed, the overwhelming sensation at the end of this book is awe over Benitez’s management.  Not just of games but of everything.  At one stage he mentions his often publicised love of the game Stratego and how he spent a couple of days obsessively drawing up strategies on how to handle each situation so that he never lost another game.  The thing is, that is how he handled every minute detail, looking at getting information or a strategic advantage.

When Liverpool beat Manchester United 4-1 at Old Trafford, he started telling any journalist who would listen a step-by-step guide on how to beat them in the hope that they would report it and some other manager would adopt the system, getting United to drop points.

That is how Benitez works, obsessively looking into each detail to see what can be done to improve it and gain an advantage.  That is what comes out of Champions League Dreams, which is more of a manual of how a great manager works than a mere biography of his successes.

An Interview with The Mirror's Chief Football Writer