It was a moving, emotional affair before the kick off against Manchester United. The game itself evoked its own emotions: frustration, anger and injustice – although inscrutable decisions by officials would always pale in comparison with the far, far bigger injustice that framed the occasion. Referees make honest mistakes; 23 years ago, elected officials and public safety providers should not have been making dishonest ones. That remains the bigger picture. 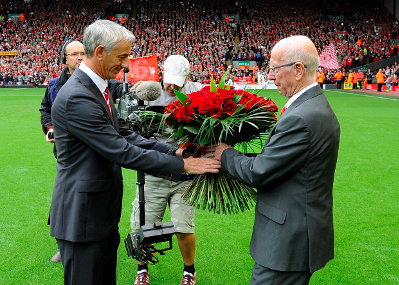 It was fitting that Sir Bobby Charlton, a survivor of United’s tragedy in 1958, brought out flowers to present to Ian Rush, a Liverpool player at Hillsborough. Kenny Dalglish, the leader of Liverpool 23 years ago, was back at Anfield, in the stands. That handshake was finally made, which meant that there were no silly side issues, and ninety-six red balloons were released. The mosaic unveiled during You’ll Never Walk Alone sent chills up the spine.

Let’s be fair to Manchester United for the club’s conduct in the lead-up to the game. And let’s credit their team for winning a game in which they were totally outclassed.

This post is for Subscribers only. A version of it will appear on the official Liverpool website this week.

Tactics for Beginners - No.1