Sunderland lined-up largely as expected – there was only one change, Adam Johnson was unfit and was replaced by Larsson on the right with Colback moving into central midfield to partner Cattermole. New signing Rose replaced Colback at left back.

Rodgers made two changes to the Liverpool side. Enrique was again unfit to start and was replaced by Johnson with Kelly introduced on the right. In the midfield Sahin was replaced by Shelvey.

Sunderland didn’t spring any surprises – in terms of formation or selection – keeping with O’Neill’s fairly rigid and defensive minded 4-4-1-1. Conversely, Liverpool’s formation and players’ positioning made for surprising reading. Once again Rodgers changed the outlook of his midfield trio by introducing the 2-1 shape (in the past three matches he used the 1-2). Gerrard sat deeper as part of the “2” with Shelvey granted freedom to operate further forward. But most surprisingly, it was Suarez operating on the flank (on the left) and Borini as the central forward. Sterling was moved over to the right. 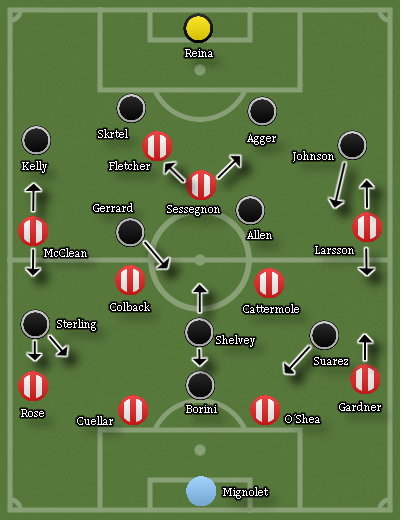 A Week To Remember