Liverpool travel to Carrow Road on Saturday (3pm kick off UK time) fresh from an impressive performance and result against West Bromwich Albion at the Hawthorns in the 3rd round of the Capital One Cup. As a reward for the 2-1 victory over Steve Clarke’s side, Brendan Rodgers will welcome his former side Swansea City to Anfield in the 4th round. Before then, Liverpool have some pressing matters to attend to in the league.

Our next three league games – against Norwich (A), Stoke (H) and Reading (H) – offer Brendan Rodgers the perfect opportunity to get some much needed points on the board and begin our climb away from the bottom of the table. Performances have generally been good and luck continues its baffling vendetta against us, but failure to win at least two of those three games could start to see some negativity set in, especially considering our increased injury list and some tough looking fixtures coming our way in November. 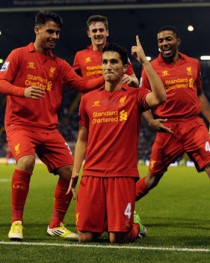 Our mid-week cup victory over W.B.A. has taken some of the pressure off Rodgers that had started to build due to our poor results in the league. The display of many of the youngsters in that match – and indeed the 5-3 victory over Young Boys in the Europa League – shows that we have some very talented youngsters who can do a job when needed. However, it may be asking too much to rely on them on a consistent basis in the Premier League especially at such an early stage in their development, but it’s clear that the game time they have received so far can only do wonders for their confidence.

The Reds won the corresponding fixture last season 3-0 thanks to an emphatic hat-trick from Luis Suarez and more of the same from the Uruguayan superstar would do very nicely.

Lucas (thigh), Daniel Agger (knee), Martin Kelly (knee) and Joe Cole (hamstring) are all ruled out for Liverpool, while there is a doubt over Fabio Borini (ankle), whilst Shelvey is still suspended. Norwich City have doubts over Sebastien Bassong (hamstring), Simon Lappin (ankle), Elliott Bennett (knee) and Steven Whittaker (ankle).