Tony McKenna ponders the logic behind any move to sell or loan out Liverpool FC’s Geordie centre forward Andy Carroll, and examines how all strikers have goal clusters and barren spells.

Andy Carroll may have already left by the time anyone starts to read this piece; I am wholly aware of that possibility. Nonetheless, the sentiments expressed below will still hold true from my personal point of view; it just does not make sense to me. I have contemplated the phenomenon of how strikers’ goal scoring records evolve and the incidence of randomness therein, and the reasons that may explain the barren periods that are inevitable even for the greatest. I have also considered that Carroll possesses an attribute that many do not give him credit for -technique -and that he may also have an aptitude for the type of tiki-taka football which Rodgers may think he does not. 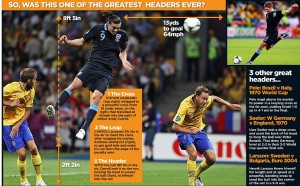 Though Carroll has had many critics amongst the fan base, I also know that I am not the only one to pose questions on the other side of the debate. In March 2012, Empire of the Kop asked, “Why does Andy Carroll keep getting dropped?” That time it was Kenny who needed to explain. The question was statistically driven rather than emotionally charged: Liverpool enjoyed a 62% win rate whenever Carroll played, against 38% when he did not. With Carroll we won 13 games; drew four and lost four; without him, we won eight, drew six and lost seven.

A Word About Clusters:

Taleb, the originator of the Black Swan metaphor, also wrote another book entitled: Fooled by Randomness: The Hidden Role of Chance in Life and in the Markets. Taleb had railed against those who had disregarded the notion of randomness corrupting their understanding and appreciation of how life and markets work. Patterns and sequences may seem seductive after the fact; but they have no predictive means of appraisal before the fact:

“While it is clear that the world produces clusters, it is also sad that these may be too difficult to predict (outside of physics) for us to take their models seriously.”

Too often we forget that, if a striker has a career tally of scoring one goal every two games, we are quoting an average mean. Of course, he does not actually score every two games, often there will be hiatuses; lots of them; to transpose Taleb’s phrase, to goal scoring feats, the goals will actually occur in clusters.

As obvious as this all sounds, it is still the case that the obvious is too often overlooked. You see it in the assessments when statisticians assess a striker’s worth by weighting individual goals in terms of importance. For instance, a winning goal scored to earn three points in a 2-1 victory is credited with more points than a fourth goal scored in a 4-0 victory. But this exercise, after the fact, ludicrously ignores the overriding point of life’s limitations: strikers do not, and cannot, choose the moments they manage to score.