Brendan Rodgers will be hoping for a first league win of the campaign against Arsenal on Sunday (1.30pm kick off UK time), and by my calculations it seems we are well overdue the three points against Arsene Wenger’s side at Anfield. The Reds have won just one of the last five meetings at home in the Premier League (three draws, two defeats) since our Peter Crouch-inspired 4-1 victory in 2007. 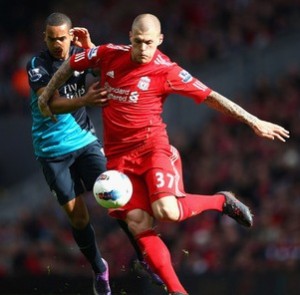 Last Sunday’s 2-2 draw with Manchester City means we have won only two of our last ten home games in the league, dating back to the last campaign. The corresponding fixture last season saw Arsenal steal a late 2-1 victory – despite Liverpool dominating – thanks to a brace from Robin Van Persie.

Van Persie and Alex Song – amongst others – have since departed, while the Gunners have added Lukas Podolski, Olivier Giroud and Santi Cazorla to their squad in the hope of reducing the 19 point gap that separated them from the two Manchester clubs last season.

Nuri Sahin – who seemingly almost joined Arsenal before signing a season-long loan deal with Liverpool from Real Madrid – could be in line to replace the injured Lucas in midfield.

Lucas (thigh) and Joe Cole (hamstring) are both ruled out for Liverpool.

Arsenal are without the services of Jack Wilshere (ankle), Emmanuel Frimpong (knee), Bacary Sagna (broken leg) and Tomas Rosicky (tendon), while the trio of Laurent Koscielny (calf), Lukasz Fabianski (back) and Wojciech Szczesny (rib) are all hoping to recover from their injuries to be included in the squad.