Football fans hover on the edge of insanity all year round. But the summer seems to push many over the precipice. It’s the time of hope and imagination, and that can be dangerous.

The massive increase in newspaper space dedicated to football, allied to the rise of the internet, has helped turn the summer into a stress-fest. But the advent of Twitter has given voice to a thousand wind-up merchants, pranksters and wannabe transfer scoopers, the result of which is to multiply the insanity.

With the news last week that Gylfi Sigurdsson may instead join Spurs came an outpouring of anger and frustration that was wildly out of proportion; you’d think Liverpool had just sold Pepe Reina to Everton for half a million quid. Sigurdsson is indeed an exciting prospect, but he’s not the only exciting prospect out there. The club was somehow on the road to destruction by failing to meet the wage demands of a lad with potential but no great CV.

As Gareth Roberts noted on The Anfield Wrap, it was probably the same people who thought Liverpool should not even be interested in players like Sigurdsson who were up in arms. But then, in the summer, fans are constantly up in arms, to the point where they’d be better off engaging in civil war recreation events.

As I write this, Sigurdsson has apparently yet to make up his mind on whether to join Spurs or Liverpool. And this led me to think of all the reasons that transfers can fail to happen – and why it isn’t always a bad thing.

First of all, it’s worth remembering that roughly half of all transfers end up as disappointments; and that just a small percent are runaway successes (if you sign one great player a year, you’re doing well). And it’s not always the ones you expect who turn out to be successful.

My own view when assessing new or potential signings is to look at what the player can offer; basically, trying to recognise the ability the manager has identified. Bar Paul Konchesky, who seemed incredibly limited, I can’t think of many examples of signings I didn’t harbour at least some hopes for. After all, not every player is signed with the first XI in mind.

Maybe I’m too optimistic, but I envisage the improvements players can make put into a better side – although I’m always aware that some won’t handle the pressure. To counter my optimism, I’m acutely aware that some signings will flop, for myriad reasons.

It’s not often that Liverpool sign players from bigger clubs, but if they do, then the player may have been only on the fringes. Again, I try to imagine how he’d fare with regular football. New players bring a sense of promise, before they’ve had the chance to go and ruin things.

But why would a player turn down Liverpool? Here are some reasons that spring to mind, and explain why some targets get away; or, having seemed to have been hooked, are set loose.

With Sigurdsson, wages seem to be an issue. Under FSG, Liverpool, like Arsenal, have a fairly strict wage structure; if you radically overpay any single player, it can cause unrest and lead to demands for further rises. Wages should reflect what the players can offer the club, not what they did in the past, or how strong their negotiating position is as a free transfer.

If Sigurdsson has been offered £70,000 a week at Spurs, then that’s a lot of money for someone of his experience. At Liverpool, even though I’d guess that there are four or five players on excess of £100k a week – commitments made when the club was in the Champions League (and in the case of Gerrard and Reina, richly deserved) – the majority of new signings under FSG will have been on no more than £50k. Luis Suarez is reportedly only on about £70,000 himself.

Players can always earn pay rises, and FSG’s view is that they won’t pay king’s ransoms; new contracts can be a reward for those who prove themselves essential. In the case of Suarez, a new deal will probably be put on the table. Prove yourself, and then get the big money.

Liverpool will always be an exciting proposition for players. It remains one of the great names in world football. But the Champions League is the holy grail for those with high ambitions. It’s almost as if the Premier League is seen as a mezzanine level below the elite, and that the elite is the Premier League (or La Liga) plus the Champions League.

Will the player get into the team? It’s always a concern for anyone thinking of joining a new club. Some are happy to fight for their place, but obviously no-one wants to go somewhere where they know they stand no chance of regular football (unless they are moving solely for the money, or are young and prepared to bide their time). If you know there’s a regular opening in the XI, it’ll help sway your decision. Of course, it can always be a sign of how much courage and self-belief the individual has.

Liverpool will always be a slight disadvantage to London clubs, given that the capital is generally more alluring for foreign players.

Example: Marcel Desailly. “Liverpool had come in for me, too [in 1996], but I needed to have a French school nearby for my children. So I opted for London for Chelsea, for family reasons and for the quality of life.”

Players may dream of playing for specific clubs, but certain managers have their appeal, too. Either they’ve worked with him before, and have a good understanding,  or they just respect his reputation. When Rafa Benítez was in charge at Liverpool, top Spanish players wanted to join the Reds, such was his reputation; before the emergence of Pep Guardiola and the national sides triumphs, Benítez was seen as Spain’s premier coach. By the mid-2000s he’d won two La Liga titles and the Champions League.

But by contrast, Gérard Houllier struggled in attracting the best Frenchmen. By the time he arrived in 1998, there was a major problem: his career highlights were in the ‘80s, and the best French manager was already at Arsenal – having just won the league and cup double.

Not only were Liverpool behind Arsenal in 1998, but Wenger was based in London – a short flight or train ride from Paris. Wenger singed Henry, Pires, Vieira and Anelka (albeit the last two as merely outstanding kids), while Houllier was left with Ferri, Diomede, Cheyrou and Cissé.

Of course, Sigurdsson has enjoyed his best football under Brendan Rodgers, having played for him at Reading and Swansea. He has a very good relationship with him, but even that doesn’t seem to be enough right now.

A player will obviously want to join the club he supported as a boy, providing that the club is doing well enough to match his ambitions.

But I’m not convinced that this helps; certainly in Liverpool’s case. Many of the Reds’ best players in recent times have been boyhood Evertonians (Rush, Fowler, McManaman, Owen, Carragher), while Alan Hansen was a Manchester United fan. By contrast, players like Craig Bellamy (initially), Emile Heskey and Robbie Keane all seemed weighed down by their desire to do well for the club they supported as a boy. (Of course, Robbie Keane supported all 92 Football League clubs.)

Sometimes you get a small enclave at a club, where a collection of compatriots flock together. Arsenal had it under Wenger with Frenchman, and Liverpool had it under Benítez with Spaniards. In the late ‘80s, Inter Milan had three excellent Germans and AC Milan had three world-class Dutchman.

It’s almost certain that Sebastian Coates joined Liverpool because Luis Suarez was already present. Settling into a new club, in a new country, can be difficult, and someone to help that process has to appeal. Gaston Ramirez may follow this summer, to make a trio of Uruguayans. 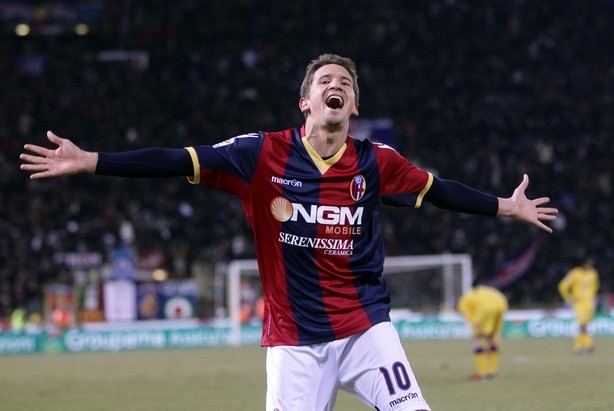 The Boy From Fray Bentos

And of course, players actually help facilitate moves. Managers use them to speak to their international colleagues to help persuade them to join, as a ubiquitous form of tapping-up.

Is the player suited to the style of play and the system?  Is the type of football that which he wants to play?

In 1987, John Barnes had offers from Manchester United and Arsenal, but his desire was to move to Italy, where, on top of being the world’s best league at the time, technical attributes were very highly valued. When no major Italian clubs came calling, he stuck to his principles: Liverpool were the most continental British club in terms of style of play, and so he joined the Reds.

Versatile players will often be concerned with just how they’ll be utilised. What does the manager have in mind? Of course, some players are happy to just put on a red shirt – Dirk Kuyt, for example. Others just want to play where they feel most comfortable, or where they can grab the headlines.

In discussions with the manager, it may be that a player doesn’t get the reassurances he is after. Clever managers don’t guarantee first-team starts, but they may have ideas that the player doesn’t like.

The Player is Stupid

He chose Manchester United over Liverpool in 1973.

“He couldn’t play anyway,” said Bill Shankly. “I only wanted him for the reserve team.”

Clubs have to hedge their bets. They have a list of targets, and may wish to speak to more than just one of them. This fate befell Steve McManaman in 1997: Barcelona agreed a fee of £12m, and the winger travelled to Spain, only to find that they’d also done the same with Rivaldo. McManaman ended up being sent home, as the bandy-legged Brazilian had been their first choice all along.

Try not to read all the gossip, and wait for the picture of the player holding the scarf aloft. Maybe get some sun. Panicking about things isn’t going to change anything, is it?

Bridging the Gap on the Big Earners