There is a gap in the market. Newspaper sales continue to fall. The most successful newspaper in the world, based purely on circulation and not quality,  no longer exists. There is still, however, a massive demand for news. The Daily Mail recently overtook the New York Times as the “world’s most visited newspaper website.” According to ABC, “Mail Online averaged 91,687,074 unique browsers last month (up 18.69% compared to May 2011)” and its nearest competitor – guardian.co.uk – “averaged 60,847,400 monthly unique browsers (up 18.42%).” If anything, the thirst for news has increased to coincide with the fall of newspaper sales. The same is true of sports fans:

ComScore…a leader in measuring the digital world, today released an overview of internet usage in Europe. The study showed that 46 percent of Europeans visit Sports sites, with Turkey and Ireland having the highest penetration at approximately 70 percent in February 2012…Globally, Turkey ranked a close second for penetration of Sports sites behind only the United States (70.9 percent). 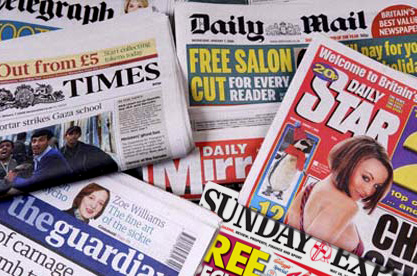 The demand is obvious. The model for successfully exploiting it so, not so. The thought occurred to me (and I will expand on it in the conclusion) looking over the Poor Media Section of TTT in preparation for the next media piece. It is all about Terry, Suarez, Carlisle, Ferguson and most recently, Martin Samuel.