In response to this article from Paul Tomkins, esteemed TTT poster Joe Pepper left this riposte in the comments section. It seemed worthy of sharing.

Paul. I have been a subscriber of this site since the very first day it launched. I have always supported you and enjoyed your writing. This time however, you have simply gone too far. Way too far.

What you fail to understand is that none of this was Hodgson’s doing. The good bits, like the bit when Walcott’s shot seemed to deflect in or when the Ukraine ‘keeper dropped the ball, they were his doing. So was the bit when Ukraine had a goal disallowed. But in no way shape or form can the performance of the England team be blamed on him.

Before the tournament even started, Roy explained the situation extremely clearly, yet you have chosen to either cherry pick or flat out ignore what he went to great lengths to explain.  He was unequivocal about the situation. He had chosen the very best players England had at their disposal, based on their performance in recent months and years, and it was up to them to basically not con him. He was massively hoodwinked by them in the match against Italy, where they showed themselves to be utter, utter con men. For Roy, there is only so much he can do. Once the players cross that white line and then go and line up on the edge of that other line – their own 18 yard one – there is very little he can do, besides give them instructions, alter the tactics and change personnel.

He had hardly any time to prepare for this tournament. Could you pick the 11 best England players in less than two months? Exactly. Not only that, but he lost Wayne Rooney, before he had even taken the job. He inherited a rag tag bunch of semi-professional amateurs with barely 14 Champions League and Premier League titles between them. A bunch that had also failed to beat any top nation for years, not including Spain a couple of months ago. And yet, within weeks, Roy had them destroying the likes of the mighty Norway and Belgium – one of the best teams in Europe that was not at the Euros.

Put all that together, and look at the task he faced. He had to get England out of a goup with the 17th and 52nd best teams in the world. Mission Impossible! And yet somehow he pulled it off. But do you give him credit? No you do not. Just like your selective appraisal of his time at Liverpool, only focusing on the negatives like all the poor players he signed. No mention of the extraordinary work he did with players like Martin Skrtel and Lucas. When he arrived, everyone was telling him they weren’t good players, but after working with them for a number of months he transformed them into players that could set their stall out early doors and put a foot in. If you had done your research you would know that when he arrived, he had a lot more expensive failures than quality players who had been bought for next to nothing. Yes, he bought Konchesky, Poulsen and Cole, but they were all con men. The worst was Cole, who in July had conned Hodgson into thinking he himself had signed him, but later revealed that it was in fact Purlsow who had signed him, so Roy couldn’t really take credit for the signing.

He acted with great dignity when given the job, and all people could do was snipe. He gave Kenny Dalglish the highest honour possible when he stated that the Liverpool job was frankly not a realistic proposition for him, before knuckling down to the job at hand without mentioning the England job more than four times in his opening press conference.

It’s all well and good sniggering, but he did all of this without any help whatsoever from the English media, who barely gave him a chance. It’s not like your mate Benitez with friends in high places – like Jim Boardman or NotBrianKettle on Twitter. Hodgson did it all on his own. Instead of having journalists cheerlead him, he stood on his record – a record you have not researched properly.

Paul, when you were still in short trousers Roy was being thoroughly debriefed by the likes of Don Howe, Wilf Ramsbottom, Charles Hughes and Wing Commander Sir Godfrey Chesinghurst of the Old Etonians 11th Brigadiers. Those Uefa technical conferences that Roy attends with his pal Gerard Houllier are not just open to anyone you know. Andy Roxburgh also went to the one in ’89 in Vienna, and Bobby Gould went to the one the year after in Reykjavik. Yes – that Bobby Gould, who’s forgotten more than you will ever know. He had Benitez’s number alright. “The lad Engothcy – the French striker – he cost a fortune – and he’s not up to Liverpool standard”. Taxi for Mr Benitez please. 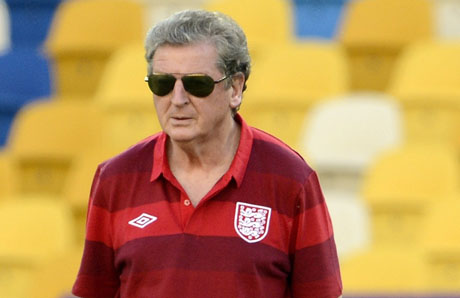 The man from Xamax

If you had done your research correctly, you would see that at Bristol he managed to win quite a few home games. Unfortunately for Roy he was once again conned by the Bristol players – who basically threw all the away games just to spite him. He left with his head held high by walking away after being sacked. But if you had bothered to investigate you would see that he had more than held his own in what most people consider the footballing hotbed of the world – Scandinavia.

Similarly, if you had bothered to read Soccernomics, from which you would learn a great deal, you would see a chapter about sharing of information and football “networks”. It goes on to explain that the best performing nations in the World Cup are always those from the five main footballing powerhouses of mainland Europe: Sweden, Finland, Denmark, Norway and Austria. It is those countries where Roy proved himself over and over and over again. It’s not something you just forget overnight. You don’t go to bed in Malmo or Orebro in 1974 and wake up in Milan in 1994 having forgotten what made you so great.

Speaking of Milan, people have also been incredibly unfair on his spell at Inter, where he was conned by Roberto Carlos into thinking he was basically rubbish. Roy did what anyone would do – sold him, and did it pay off? Yes it did, as he propelled Inter to the extraordinary heights of 7th, 3rd and a Uefa Cup final defeat. The club has never reached such heights before or since, or in fact got anywhere near. And when talking about his time at Blackburn, you would do well to remember this, since this is why he got that job, the hardest job in English football despite Jack Walker’s wealth. With astute signings such as Martin Dahlin, Christian Daily, Nathan Blake and Kevin Davies, Hodgson almost achieved the impossible of keeping them up, in fact he would have done so had Brian Kidd not failed so horrendously in improving Hodgson’s record by more than he did. Once again he was conned, but decided to walk away after he was sacked. Did he stop there? No, he only went and outdid himself by going back to Grasshoppers and guiding them to a frankly breathtaking 4th place finish.

Do you give him credit for winning the Danish superliga with Copenhagen? No you do not. That was an incredible achievement at a club which has only won the Superliga half of the time. And what about Udinese? You use it as a stick to beat him but he has explained on more than one occasion with regards to Udinese that “I could have chosen a better club to come back to. It’s an extremely strange club.” Once again he was let down by being at a strange club, and was conned by all the players and staff, and also those of the opponents.

And do you talk about his phenomenal legacy in the United Arab Emirates? He has explained it very clearly:

“It was good to know I could get my message to players who many say are uncoachable. It’s hard work; they’re basically lazy. But I had them drilled and pressuring opponents almost like an English team. Most coaches who go there are just fannying around, but it’s not my nature”.

Once again he receives no credit. The people of that part of the world are extremely lazy – it’s basically genetic – yet he was able to transpose the finest football skill on the planet – putting the opponent under pressure in the English way.

And now this travesty of justice in Kiev. Roy had the perfect gameplan. Oxlaide-Chamberlain had been especially brought into the squad following the schooling he gave Pirlo and Ambrosini when Arsenal beat Milan. Both players were anonymous in that game and went missing. Sadly, the Ox since conned Roy by doing nothing in the other games, forcing him to drop him, and allowing Pirlo to run the game, unimpeded by his arch nemesis from the Emirates.

The man’s legacy is self-evident. What he has achieved with this England team in getting them out of the group stages is … well, you could almost say it transcends football. It humbles the soul and shows that anything is possible. He also did it under unimaginable pressure with hacks like Henry Winter and Paddy Barclay breathing down his neck all the time, waiting for him to fail so they could jump on any tiny mistake he made. But he did it. He achieved the impossible. He made all proud Englishmen dream. He made football a thing of beauty again and reminded us of why we love the game. He made it fun again. Two banks of four, edge of the area, get fucking rid, just fucking launch it.

It is perhaps no exaggeration to say that is is probably the greatest achievement in English footballing history, and yet you have written this highly critical article. But will Hodgson moan? No. He will make no excuses, he will shoulder responsibility as he always does, and he will carry on with dignity. The future’s bright. Look out Brazil 2014.

England, He’s Yours. You're Welcome.