Andrew’s final appraisal of our playing squad focuses on Liverpool FC’s attacking players; the players we should keep and those we should sell, and why.

And so we reach the end of the annual squad assessment. Thanks so much for all the comments and feedback so far. This will certainly be the shortest of the trilogy, but hopefully there are enough grey areas to trigger some more interesting debate. NB: I’m only featuring players who made at least five competitive appearances for the Reds’ first team in 2011/2012. PPG = points per game when starts; PGD = personal goal difference (net goals scored by the team when that player is on the pitch). 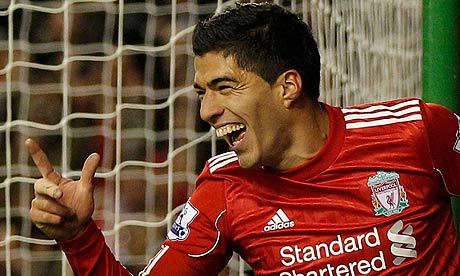 Reasons to keep: I don’t think Suárez is the best player in the Premier League, but I do believe he’s the hardest player to play against. The only way defenders can get the better of him is to wind him up, either verbally or by persistent fouling. There’s just no answer to his touch, balance, movement, quick feet, drop of the shoulder, swivel of the hips, physics-defying turns and low centre of gravity.

Torres at his best was clearly more potent and effective, but I don’t remember ever seeing a Liverpool player who excites me as much as the Uruguayan. He is remarkably skilful and can make even the best defenders look hopeless. And what about the nutmegs? If there’s a player who is even close to Suárez for nutmegs per game, I’d be astonished. And when they don’t come off, it often leads to a corner or a throw in a dangerous position.

It’s The Hope That Kills You