This is the 32nd meeting between Liverpool and Chelsea in the past eight seasons, more than any other fixture in any eight year period in English football history.

Liverpool have won five of the last seven Premier League meetings between the teams, and the last three in a row.

The Reds have scored only 11 goals in their last 10 Premier League home games against Chelsea.

49% of the goals Chelsea have conceded have been shipped in the last 15 minutes of Premier League games this season.

10 of the last 11 goals that Chelsea have conceded have come in the final 20 minutes.

Liverpool have conceded fewer shots on target against them than any other team in the top flight this season (126).

In only two of the last seven clashes between these two teams in all competitions have both sides managed to get on the scoresheet.

In six of the last seven meetings between these two teams (in all competitions), the winning side have scored exactly two goals.

Andy Carroll has scored three goals in his last five Liverpool appearances; the same number as he had managed in his previous 29 appearances for the club.

Liverpool have scored with only 8.8% of their shots at goal in the Premier League this season; the lowest proportion in the top-flight.

Both teams unsurprisingly made changes to their selections. Dalglish made four changes in terms of personnel – Enrique, Gerrard, Spearing and Bellamy were out of the starting XI (with the first two out of the match squad, the last two on the bench) with Carragher, Shelvey, Maxi and Carroll coming in. The formation was changed too – in the final Liverpool started with a sort of 4-2-3-1 but here the shape was more of a 4-2-2-2.

On the Blue side the biggest surprise came from the high number of changes Di Matteo made – only three players “survived” the Final – Ivanovic, Terry and Ramires. Without Mata on the pitch the formation was changed too, Chelsea opting for a 4-1-2-3. 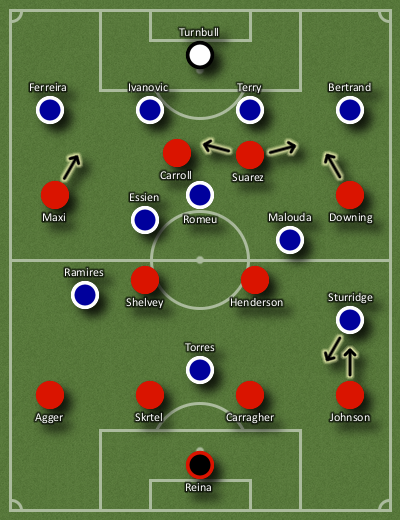 As soon as the starting selections were confirmed I roughly explained (here and on Twitter) the most probable tactical scenarios given both team’s starting line-ups.

I expected Chelsea to line-up with 4-1-2-3 but their players’ roles were open to different variants. In the first variant I explained how Ramires could play centrally with the key role of pushing forward in order to link the team and deliver the crucial runs from deep on the break, with Romeu the deepest and Essien in between them, then Malouda on the left to deliver the attacking width and Sturridge to cut in from the right to directly support Torres in attack. In this scenario I expected Chelsea to sit deep, soak up the pressure and hit direct balls down the flanks, through the channels and over the top for their speedy front four players to latch onto and catch Liverpool off guard.

The second variant was for more of a lopsided cross between 4-1-2-3 and 4-2-3-1, with Ramires playing tucked in and relatively deeper on the right, with Sturridge higher on the left and Malouda part of the midfield trio. Here I expected Chelsea to be more possession-oriented, with the aim of keeping the ball and transforming their deeper recycling process into attacking team moves involving Malouda going wider on the left and Sturridge pushing infield in order to attack in more of a lopsided 4-4-2 shape, with the aim of delivering penetrative passing and movement angles.

In both variants the common threat for Liverpool was that Chelsea were going to have a midfield advantage (3v2) and could easily out-pass Dalglish’s team; then given the pacey and fluid front players the away team in theory would have all the required tactical ingredients to really worry the home team.

Final of Contempt, Season of Discontent