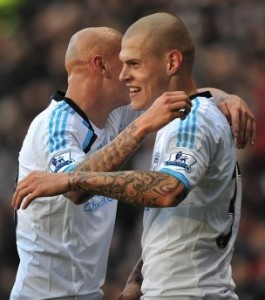 Liverpool host Aston Villa on Saturday (3pm kick off UK time) with the club looking to halt the alarming run of form which has seen the Reds pick up just eight points from a possible 36 since January 1st.  Kenny Dalglish’s side secured a 2-0 victory at Villa Park in December thanks to goals from Craig Bellamy and Martin Skrtel. Victory for Liverpool on Saturday would secure our fourth league double over Villa in 20 seasons.

With Pepe Reina missing the first of three matches due to the red card he received during the 2-0 defeat to Newcastle, it will be interesting to see how Doni performs in goal. There are  two league games to be played before the FA Cup semi-final against Everton and although there’s very little to play for on paper in the league (finishing above our local rivals should be motivation enough however), two good results against first Villa and then Blackburn would ensure the Reds go into the FA Cup semi-final against Everton in a more positive frame of mind and with some momentum behind them.

The rest of this post – including stats, form and team news, and Mihail’s tactical preview – is for subscribers only.

News, Views and Media Reviews (No.5)

Dazed and Confused: A Liverpool Nosedive