Pardew made only one change following the win at WBA, with Tiote (returning from injury) replacing the injured Coloccini. This forced a change in formation from the lopsided 4-4-2 against Hodgson’s team. Here Pardew switched, rather surprisingly, to more of a 4-1-2-3 platform, with Tiote playing behind Cabaye and Guthrie, Gutierrez on the left (leaving Perch to come inside and partner Williamson), while Ben Arfa kept his wider right role with Ba granted the freedom to roam from the left.

On the red side, Dalglish made three changes, but kept his formation 4-3-3 (but with a 1-2, rather a 2-1 triangle), as against Wigan. Henderson, Downing and Kuyt were replaced by Shelvey, Bellamy and Carroll, which meant Suarez roaming from the left, Bellamy keeping his wider presence on the right flank, while Shelvey was granted the freedom to push forward from the midfield area. Carroll, logically, played as the lone forward. However, the biggest and the most surprising change was that Skrtel was granted his favourite right centre-back slot, while Carragher was forced to take his unusual left-oriented centre-back position. 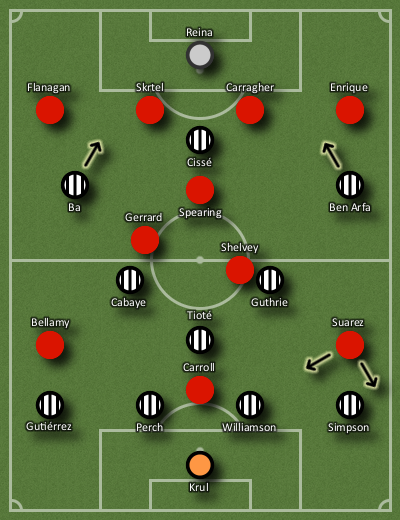 The match started with a rather sloppy tempo and overall intensity. Both teams played with perfectly identical formations and player roles (see the diagram), as a result creating a sort of overlap in the overall frameworks and similar playing style and attacking approaches.

Dazed and Confused: A Liverpool Nosedive

News, Views and Media Reviews (No.4)