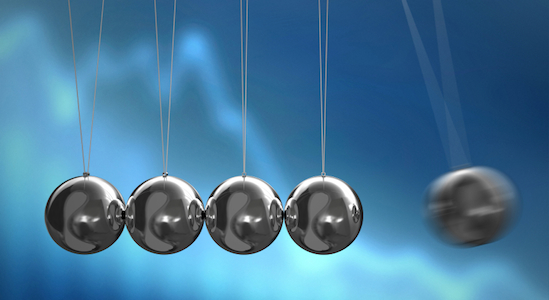 Hardly a Match of the Day or a 5Live ‘Kicking Off’ goes by without someone mentioning ‘momentum’ or ‘success breeding success’ or something like it. The same can be said for Tomkins Times discussions – in dark despair after a long run of defeats; in desperate hope following a big win following a disappointing sequence (and there have been many). Everyone believes in momentum.

Everyone knows it must be a fact of sporting life. Most of us have experienced it – or feel we have. But is there actually anything in it? Twenty million people – or whatever it is – can’t be wrong. Except that sometimes they can.

To put it bluntly, for something to be true requires more than people believing it to be true. It requires evidence. Serious studies have gone in search of that evidence. Before examining them, though, we should define some terms and draw some distinctions that exist in the more technical literature. So: psychological momentum describes ‘changes in performance based on success or failure in recent events that change the beliefs or the psychology of athletes’. Clearly, it can be either positive or negative. Sports psychologists also refer to the ‘momentum chain’, acknowledging that what is being proposed is that the idea of success breeding success can be deconstructed into two separate psychological processes: ‘success breeds confidence’ and ‘confidence breeds success’.

It’s also useful to consider what we mean by momentum itself, irrespective of whether it has a psychological component, especially because, as we shall see, it’s often difficult to tease out that psychological component. If a team, for example, wins 25 of its matches over the course of a 38 game season, then those 25 wins will come in sequences – some long, some short. The same would be true of a team that wins only ten times, except of course that the sequences, on average, will be shorter. But in either case, you can predict the sorts of sequence-lengths you would expect by chance alone if their wins were distributed at random through the season.

Positive momentum, then, would be demonstrated if there were more longer sequences than you would expect by chance alone – and you’d need to apply some statistical technique to test for that. Long, even ‘surprisingly long’ sequences of wins are not evidence of momentum. They need to occur at a significantly greater frequency than would be thrown up by chance.

The studies of momentum themselves tend to fall into one of three categories, surveyed in an article by Roger Vergin in The Journal of Sport Behavior in 2000.

First are those looking at the performances of individuals, often in a controlled, experimental setting, with individuals being set tasks to do and being monitored. Basketball players and fans, for example, mostly share a belief in the idea of ‘hot hands’, where a successful basket increases the chances that the player’s next attempt will also be successful.

Then there are studies that seek team momentum within a match: is a team more likely to win if it comes from behind to tie the score?

And finally there are studies looking at team performance over whole strings of games including whole seasons, mostly through the statistical analysis of the likelihood of those strings of results arising from pure chance alone. All of these are of some interest no doubt, but for most football supporters, at least, it’s the last of these that really interests us.

Success breeds confidence but is the chain complete?

To start with the first link in the momentum chain, there is no doubt from Vergin’s survey that success makes athletes feel more confident in their ability and their chances of future success. The difficulty comes in finding evidence for the second link.

Most early studies, including several that claimed to have detected momentum, failed to take account of obvious confounding factors, of which the most obvious is ability. If a team wins because it’s a great team, and it remains a great team for the next match, then it’s no surprise if it wins that one too. But that tells us nothing about psychological momentum or the existence of a momentum chain. Nor would I draw too deep a conclusion from the fact that my basketball shots consistently miss while for Liverpool FC stakeholder LeBron James, success follows success.

So if we dismiss these flawed studies, it’s clear from Roger Vergin’s survey of investigations up to 2000 that no actual evidence of a momentum chain had been found.