This was to be the fifth FA Cup semi-final between the two Merseyside giants. Everton won the first (in 1906), but Liverpool have progressed through the last three. No other fixture in FA Cup history has seen more than three semi-finals.

On all three occasions Liverpool have beaten Everton in an FA Cup semi-final, the Reds have gone on to lose the final. [not so keen on that one Mihail – time to end that sequence]

Liverpool and Everton have been drawn together 16 times before in FA Cup history, with The Reds emerging victorious on nine occasions and the Toffees on seven.

The Reds are appearing in the semi-finals of the FA Cup for the 23rd time. Of the previous 22, they have made it to the final 13 times and been eliminated nine times.

Since 1986, however, Liverpool have won seven of their eight FA Cup semi-final ties, with Crystal Palace (1990) the only team to eliminate them from the last four in this period.

Everton have appeared in 24 FA Cup semi-finals, progressing to the final 13 times.

David Moyes’ side have been eliminated at the semi-final stage more often than any other team in the history of the competition (11).

The Toffees have reached the final the last six times they have made it to the FA Cup semi-finals: three times in extra time and once on penalties (vs Man Utd in 2009).

Only Manchester City (seven) have played more FA Cup semi-finals since they were last eliminated at this stage than the Toffees (six).

Liverpool v Everton has seen more red cards than any other Premier League fixture (20), while the Reds were reduced to 10 men in their last FA Cup tie against the Toffees.

Everton have won four and lost none of their last five matches in all competitions.

With a victory against Everton, Liverpool would be take one step closer to becoming the first team to achieve two FA/League Cup doubles, after they won both cups in 2000/01.

Liverpool have only kept one clean sheet in their last 12 games in all competitions, but that was against Everton (3-0 in the Premier League).

Both managers rotated their teams in the league games prior to this match, and as expected both teams lined-up with their best players.

It wasn’t a surprise that Moyes chose to start with a 4-4-1-1 formation. In terms of personnel as a whole he used the expected players but there were some odd decisions too, of which more later.

On the Red side, Dalglish approached the match with 4-4-2, the formation he used in the other two Merseyside derbies this season. The biggest surprise was that Enrique was benched for the second consecutive match, with Agger filling on the left, while Skrtel and Carragher once again formed the central duo.

The match was a rather sloppy and dull tactical contest. 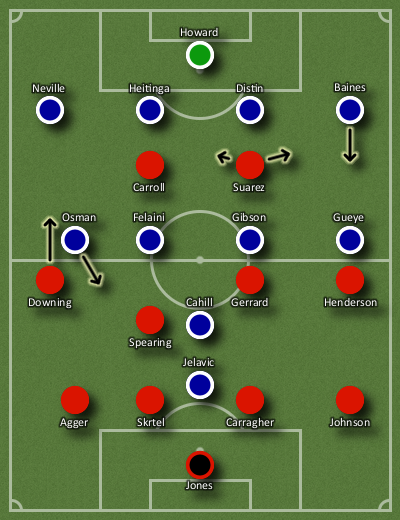 Moyes is in general a reactive type of manager. He prefers to adjust to what the opposition creates tactically, rather than creating it himself. It wasn’t a surprise that in such as big game he once again was reactive from the start, but what was surprising was how he did it.

From both tactical and technical points of view it’ wouldn’t be an exaggeration to say that Everton were very poor. Tactically, the team had odd balance all over the pitch. In the preview I said I would be really surprised if Moyes starts, as expected, with Cahill and Jelavic upfront but without a proper attacking wide player on the right to complement Baines on the left. Then as soon as the team were confirmed, I was even more surprised (but glad from a pure Liverpool point of view!) to see Osman play on the right with Gueye playing left in front of Baines.

The problem was pretty obvious and easy to foresee. Playing Osman in a narrow role on the right and then putting Gueye (left footed left winger) in front of Baines, Moyes not only unbalanced both flanks but blocked the path of one of his most potent attacking weapons – Baines. As a whole Everton had two natural wide players on the left, seeking to do similar things and the logical result was that both of them did more harm than benefit to each other (more so given that Gueye wasn’t particularly interested in tracking back), while on the right the team didn’t have anyone capable of driving down the flank in order to deliver the required balance. Neville with his lack of mobility as expected stayed deeper, while Osman’s tendency was always going to force him to tuck inside and target the inside channel rather than going on the outside.

As a result Everton failed to stretch the play properly. On the right there wasn’t anybody who can do that, while on the left both players were effectively taking each other out. Several times when Baines pushed forward when Everton regained the ball, with Gueye aiming to receive the ball around the central line before trying to dribble with it down the flank, both players were suddenly close to each other, seeking the ball at the same time and in the same area. Hence confusion often resulted for Everton. Either Baines should’ve been less attacking-oriented, tasked to bring the ball out of the defence (as one of the two cultured enough players able to do that, the other was Heitinga) to the central line where to hand the initiative to Gueye, or the winger should’ve stayed in a much more advanced position, aiming to pin Johnson back and as a result vacate the whole flank for Baines to exploit.

It should be noted that in contrast to the last two Derbies, this time the opening tempo was rather slower, more passing-oriented, with less intensity and obvious will from both teams to not to press fiercely but to drop into their defensive shapes. This, coupled with the fact that Moyes had Gibson as one of the midfield two, made Everton much more recycling-oriented than usual. With the former United players knocking the ball from side to side and with Osman being tucked inside, Everton did better in terms of passing the ball through the middle than being a threat on the flanks, something that didn’t suit their type of forwards – both Cahill and Jelavic prefer good balls in from wide areas, rather than slick passing on the ground and through the middle.

If Moyes’ initial idea was to try and keep Liverpool at bay by keeping the ball much more than expected, then the question is why use such a forward duo? Granted, it was Everton who opened the score, with the nature of the chance created perfectly suiting their strategy. It was Liverpool who created the goal-scoring opportunity via a defensive mistake, with Everton’s part being only to react well enough and take advantage of the gift. But given their initial increased passing-orientation, it was rather ironic that the chance came following a hoofed ball from deep rather than a passing team move.

It’s subscribers only from here on in