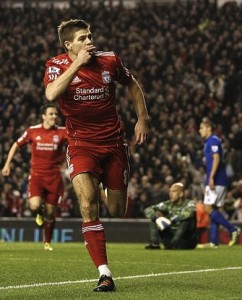 Liverpool make their 23rd appearance at the semi-final stage of the FA Cup and it’s fitting – given that the tie is being played on the eve of the 23rd anniversary of Hillsborough – that their opponents are Everton. Liverpool have already completed the league double over David Moyes’ side this season winning 2-0 at Goodison and 3-0 at Anfield, although the Toffees currently sit one point and one place above the Reds in the Premier League. Victory for the Reds will see Kenny Dalglish’s side reach their second domestic cup final of the season.

This will be the 23rd – it’s that number again – meeting between the two clubs in this competition and the fifth time they’ve met at the semi-final stage, to add to the two occasions that they’ve contested the final. Although Liverpool have knocked Everton out of the FA Cup at the semi-final stage the last three times they’ve been drawn against each other, the Reds have gone on to lose each subsequent final. It’s a pattern that we’ll hope to break if we progress to the 2012 final yet again at Everton’s expense.

The rest of this post – including FA Cup history, stats and team news – is for subscribers only.