As expected, Blackburn kept the 4-4-1-1 from their previous game against West Bromwich Albion. There were, however, some personnel changes. Marcus Olsson moved to the left wing, pushing Hoilett into the hole behind Yakubu. On the right, Formica replaced Pedersen and in the middle Dunn was forced to drop deep alongside N’Zonzi. This meant there was no space for Lowe who was relegated to the bench.

On the Red side, Dalglish, unsurprisingly, made several changes with the FA Cup Semi-Final in four days’ time clearly on his mind. The formation was again a sort of 4-2-3-1 (with a 2-1 midfield shape, again), but this time with Spearing and Henderson in the middle and Shelvey in the hole. On the flanks, Downing and Kuyt were replaced by Maxi Rodriguez and Bellamy, while up front Carroll started in place of Suarez. 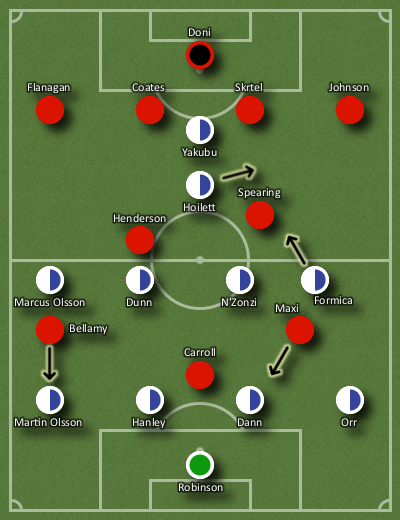 News, Views and Media Reviews (No.5)