Liverpool have drawn 99 games away from home in the Premier League era.

The Reds have netted 496 goals on the road in Premier League history.

QPR have won one of the last 11 league games against Liverpool (W1 D2 L8).

QPR have dropped more points (15) from winning positions than any other team and 13 of those have been thrown away on home soil; also a division-high.

Fifty five per cent of the goals QPR have scored have come in the first half, a Premier League high.

Adel Taarabt has fired in the most shots this season without scoring in the Premier League (63) closely followed by team-mate Shaun Wright-Phillips (58) and then Stewart Downing of Liverpool (52).

Liverpool have won just two of their nine Premier League games in 2012.

QPR have won just one of their last 16 Premier League matches, a run which includes a 0-1 defeat to Liverpool.

QPR have picked up the joint-most red cards (5) along with Bolton.

Hughes went with his usual narrow 4-4-2 (or, more accurately, 4-2-2-2 as Diakité and Derry held deep positions in the centre of midfield). Zamora and Cissé started up front with Taarabt (left) and Barton (right) tucked inside.

Dalglish had various options with his starting formation and team selection. He chose to make two changes from the previous game against Stoke. Adam came in for Maxi while Kuyt started in place of Carroll. Both Kelly and Suarez were thought fit enough to start, but Kelly had to be taken off in the 34th minute when it was clear that wasn’t the case. This meant playing a 4-1-2-3 formation with the surprise of Kuyt and Downing inverted on the flanks. It was the first time this season that Kuyt has started on the left wing. Adam played alongside Gerrard, just ahead of Spearing. 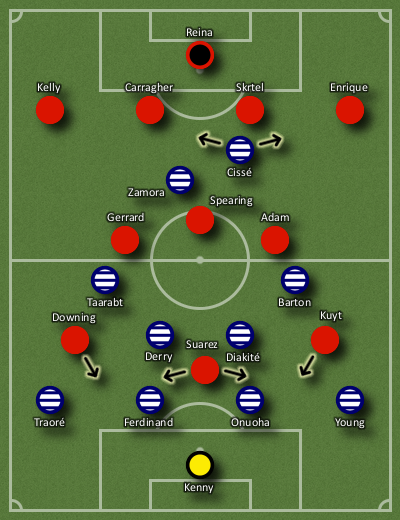 In the preview to the match I listed the key areas where QPR have been vulnerable this season. Right from the beginning Liverpool started aggressively, with great intensity on the ball and good pressing off it to ensure that they targeted those specific zones.

QPR’s wide players are known for their poor tracking back, something that was magnified by the fact that they were both tucked inside. This meant they were playing in more central areas and less able to cover the flanks. To exploit this, both Enrique and Kelly pushed forward reasonably well to stretch the play. They didn’t over-commit though, receiving most of their passes around the half way line and not venturing too deep into enemy territory. Both Taarabt and Barton were forced to move wider to try and cover them, but as Liverpool were playing with a quick tempo they were often caught between the central and wide areas in no man’s land. Thus, they failed to be a convincing presence in either zone.

News, Views and Media Reviews (No.3)