All data in this article is courtesy of Infostrada Statistics, part of the Infostrada Sports Group.  Infostrada specialises in collecting and managing sports data for every sport imaginable. The Infostrada databases contain historical results from any major sporting competition. These results are updated continuously and live, as the sporting events are happening 24/7. In addition to containing historical results, Infostrada also houses biographical information on tens of thousands of athletes. These biographies are also updated continuously. 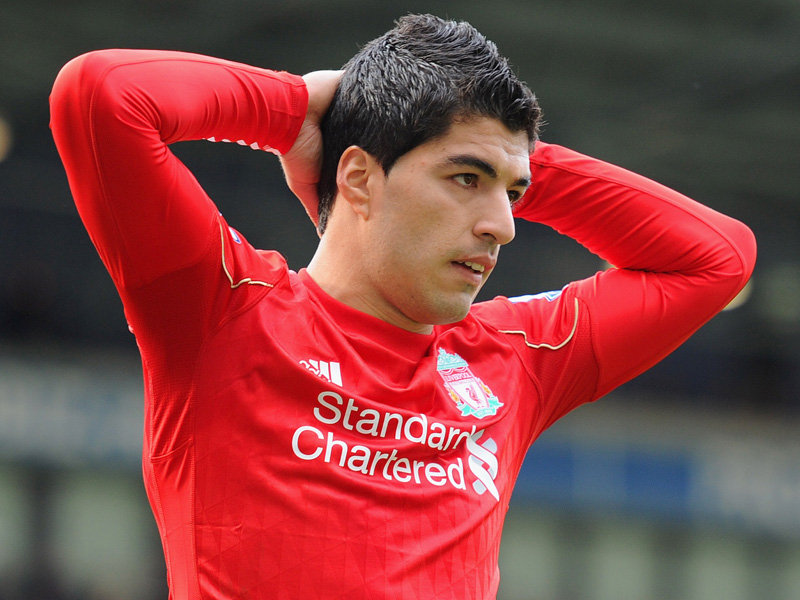 Since the New Year there is no longer a debate about this Liverpool team. It doesn’t score enough goals and convert enough clear chances to take that step up to the Champions League places.  The debate is now firmly focused on how to solve this. Fundamental to this debate is in which position and which system do you play your best player, Luis Suarez?

So far, the debate has focused mainly on tactical opinion and the high-level evidence that he scored lots of goals for Ajax (81 in 110 games).  It should also be noted that his international scoring record for Uruguay is a not-too-shabby 26 in 52 games (for comparison, Alan Shearer was 30 in 63 for England).

So far, so unhelpful. As a result, the debate has focused on why is his Liverpool goalscoring record so much worse than Ajax and Uruguay.  All kinds of weird and wonderful theories have been floated, from him not trusting the players around him, to being a scruffy dribbler, to being worn-down by off-pitch issues.

Now, thanks to the good people at Infostrada we are finally ready to provide the data that takes the debate to the next level.  They’ve kindly provided Suarez’s goals, assists and shot on/off target data for each of his five seasons in the Netherlands (including Groningen).  The results are emphatic.

Let’s start by looking at his headline goals & assists per minute:

His best season with Ajax (09/10) saw him scoring at more than a goal a game. For the rest of his time at Ajax he was scoring twice as quickly as he is at Liverpool.  That’s normal because as we all know from the English media, “it’s easier to score goals in the Eredivisie than it is in the Premier League”.

Now let’s dig a bit deeper and look at the frequency and volume of shots required to score:

If we think Suarez has a lot of shots playing for Liverpool (between 4 and 5 every game) this is nothing compared to his time at Ajax where it was every 14 minutes over four seasons (over six per match). In his best season this peaked at a shot every 11 minutes (over eight per match).

Where it starts to get really interesting is how efficient Suarez is at converting shots to goals. His best season in the Eredivisie was his first at Ajax in 07/08 where he scored with almost 16% of his shots (6.4 shots per goal).

At Groningen and seasons two and three at Ajax the conversion rate was around 12% and 8 shots per goal. In his final season at Ajax (post World Cup) and then Liverpool the conversion rate has almost halved to 7% and the shots per goal has shot up to about 14. In terms of efficiency, the current season for Liverpool is the worst of Suarez’s career. But again, this is “normal” because “it’s easier to score goals in the Netherlands than it is in England”.

Comparison to Rooney and Van Persie

Thanks to EPL Index (Wesbite: http://www.eplindex.com/),  Twitter: https://twitter.com/#!/EPLIndex) we can source the Opta data for the last four seasons.

Here we can see very clearly that while Suarez at Ajax scored at a slightly better rate than Rooney or Van Persie, his rate at Liverpool after 33 full games is more than twice as bad.

With assists, Suarez at Ajax is significantly better than Van Persie but Suarez at Liverpool is again more than twice as bad (but this could be symptomatic of Liverpool’s wider inability to convert chances. Sadly we don’t have the chances created data at Ajax, only those chances that became assists)

Now dig deeper again and look at the frequency and volume of shots required to score:

This is the killer. Van Persie and Rooney both manage five shots per game in the Premier League over four seasons, compared to Suarez’s six at Ajax.

Yet, compared to Suarez at Ajax, Rooney needs one shot less to score a goal and Van Persie two less, all this in the supposedly “harder” Premier League.

If Suarez was a great goalscorer in the “easier” Eredivisie then over four seasons you would expect to see his numbers significantly better.

Once at Liverpool, Suarez has a shot at an almost identical frequency to Rooney yet he needs twice as many shots to score one goal.

[PT: Of course, Suarez is just one year into his time in English football, whereas Rooney has been at Manchester United for eight seasons now, improving gradually over that time; before 2010, he’d only scored more than 14 league goals in a season once, and averaged a hardly-prolific 13 over his first five seasons. Equally, van Persie has recently gone from, at best, a goal every other game, to roughly a goal a game in the past year or so. Both players are older than Suarez.]

A quick mention on penalties. During his time at Ajax, Suarez scored 18 penalties. Since 08/09 Rooney has scored 15 and Van Persie seven.

Without the actual details on penalties taken/scored, the approximate conversion rates excluding penalties are:

Now penalties have been excluded, Van Persie’s “shots per goal” is more than three fewer than Suarez at Ajax!

[PT: As roughly 70% of penalties are scored, if Suarez had taken all of Liverpool’s penalties since arriving, and scored them at the average rate, he’d have more goals and a higher conversion rate from chances – as a penalty increases the chances of scoring from the ‘normal’ shot conversion rate of 5-15% to 70%. The problem is, he’s taken one in the league, and one in the cup, and missed both.]

The analysis of Suarez’s Eredivisie data is fairly emphatic. We can draw three firm conclusions:

At face value, Suarez appears to be a great goalscorer but this is probably not the case. The reality is that he is a forward who is heavily involved in his team’s attacking play but who is fundamentally wasteful.

So what does this mean for Liverpool going forward?  Quite simply, that if the plan is to continue to rely on Suarez to be the primary goalscorer in the team then it will in all likelihood fail. Suarez will not be scoring enough goals for Liverpool to win enough games.  Therefore the plan must be how to best utilise Suarez as a roaming 10 in a system where the primary goalscoring responsibility can be borne by others.

Looking back to his time in the Netherlands this seems obvious, as he spent most of his time not playing centre forward:

Analysis of the future tactical options and the implications for the personnel at Liverpool will be the subject of a follow up post.