Harry Redknapp may have won six of his eight games against Liverpool as the Tottenham Hotspur manager, but he was stuck in London due to the weather. Jamie Carragher has famously scored as many goals for Spurs as he has for the Reds, but he was not involved in the game either.

For this match Tottenham were without key players, notably including Van der Vaart, Lennon, Defoe and Kaboul, as well as their manager. But Adebayor, Walker and Kranjcar were fit enough to start.

With both Modric and Kranjcar starting, it was interesting to see who would play behind Adebayor and who would start on the right. As I argued before the match, there would be little tactical difference since both men are playmakers rather than pure attacking midfielders able to drive from deep positions, so whichever player started in the hole would drop deep to join in the build-up play. Both players also tend to tuck inside, so it mattered little which of them played on the flank. In the end, Modric played in the hole with Kranjcar on side of the midfield.

In terms of formation there was little surprise when Spurs lined up 4-4-1-1, as they have done in their “big” matches this season.

Dalglish, who has become famous for making lots of tactical tweaks, opted to make only one unforced change in his starting eleven (Gerrard in for Henderson) and kept the same formation from the previous match – 4-1-2-3. But since the opposition are one of the best teams in the country right now, even though the formation was nominally 4-1-2-3 in both matches the behaviour, especially in attack, was very different. The other change, necessitated by the late injury to Enrique, was that Kelly came in as right back, with Johnson switching over to the left. This was not a predetermined tactical change by the manager. 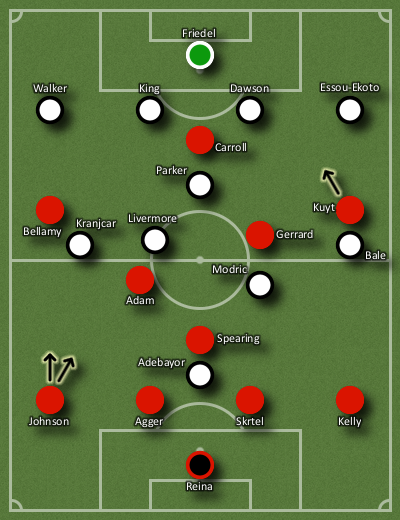 Both sides made their tactical plans clear from the outset. Spurs showed their willingness to drop into deep positions and try to shut down the space in the final third by forming two banks of four. Parker patrolled the zone in between the two banks by quickly morphing the 4-4-1-1 formation into 4-1-4-1. They were incredibly passive in terms of closing down, with both Bale and Kranjcar dropping level with Modric and Livermore to flood the wing zones as well as the centre of the pitch.

Liverpool were more active in closing down, albeit with a relatively deep defensive line. The aim was to ensure that Spurs would not have free space in behind or through the channels where they tend to target their attacks; at the same time, they wanted to put enough pressure on the deeper recycling process which is key to Spurs’ style of play.

Tactically Liverpool needed to be deep but at the same time press the midfield, which creates a paradox – usually when you press you need to be higher up the pitch; whereas a passive style is better suited to dropping deep. So they needed to engineer an interesting solution.