Before this match there had been just 11 goals scored in seven Premier League matches between Liverpool and Stoke. Added to Liverpool’s recent scoring problems, perhaps the lack of goals should not have been that unexpected. 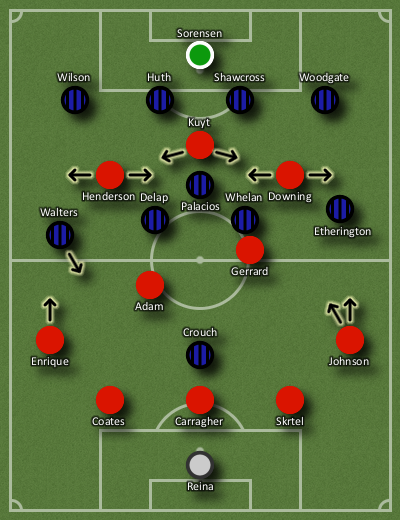 Tony Pulis did not cause any surprises with his starting eleven, but he did change from his usual 4-4-2 formation. He opted to start with a sort of 4-1-4-1 as he had done in last year’s Anfield fixture. Palacios played the “sweeping” role behind Delap and Whelan, while Walters went to the right flank with the aim of cutting inside and helping Crouch when the team went on the attack.

Dalglish tried to be a bit more creative, choosing an unorthodox formation. The 3-4-2-1 shape he chose was the same as the one used last time Liverpool played Stoke at home. Just before the match it became clear that Agger was going to miss it due to the knock received in the previous match, Maxi had an arm injury (hence his omission from the league cup match against Manchester City) and Bellamy is not yet considered fit enough to play two matches in a week. Suarez is still serving his suspension, so Liverpool’s attacking options were limited.

From the start Stoke set up the barricades in their own half. The two tight banks of four dropped very deep, with Palacios patrolling the small zone ahead of the back four. The big question in this game was how Liverpool would be able to break them down.

The tempo of the game was slow, with Liverpool trying to hold onto possession first and then trying to probe the Stoke defence by using fluid movement in their front seven (i.e., everyone except the three centre backs).

Liverpool’s main theme was to build up patiently and then overload the Stoke defence by moving up the pitch as a unit. The passing patterns and angles were created so that each player could participate both in the ball-recycling moves and in the attacking phase by pushing forward. All of this made perfect sense. As I argued before the match, it was imperative that Liverpool tried to confuse Stoke with fluid movement from deep positions, including overlapping midfielders, all over the final third.

The personnel roles and the specific tactical plan became very clear early on, even though the players were overlapping and shifting positions constantly. Adam and Gerrard started deeper and more centrally, aiming to bring the ball out of defence and pull the strings in the attacking phase. This deep central position is becoming Gerrard’s “natural” role, perhaps answering some of his critics who felt he couldn’t adapt from his “false 10” role under Rafa Benitez.

Their presence helped to dictate the tempo of the game, allowing the team to slow things down when necessary and then speed things up to give them more attacking drive. The diagonal passes from both players, especially Adam, helped to give the side more attacking edge. When the build-up phase was complete (or if the ball had been played over them from the defenders), they were encouraged to push on and join the other five attacking players. Here they pressurised Stoke’s defence, and both men had the freedom to make vertical runs into the penalty area. Gerrard was more likely to do this as he has more pace than Adam and has more attacking awareness.