Our woes in the league take a back seat for a week as our focus turns to reaching a first cup final since 2007 and a potential first appearance at the new Wembley Stadium. The winners of this tie will face either Crystal Palace or Cardiff City of the Championship, with the winners of the competition booking their place in the third qualifying round of the Europa League. 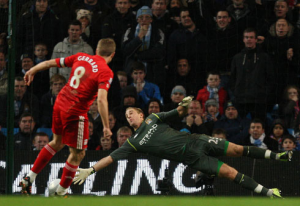 Liverpool secured a 1-0 victory in the first-leg thanks to a Steven Gerrard penalty. So what is needed in terms of a result that will see us book our place in the final? A win or draw of any scoreline would be enough to send us through to the final, while a City victory of a solitary goal would see the game go to extra-time. If after extra-time the score is 1-0 to Man City then the tie will be decided on penalties. If after extra-time the score reads 2-1 or 3-2 (or 4-3, 5-4 and so on) to Man City then they will go through courtesy of the away goals rule. Simple.

This is Liverpool’s fourteenth semi-final appearance in this competition since 1978 – the year when we first reached this stage – and we’ve only failed to reach the final on three occasions. Our tally of ten League Cup final appearances and seven cup final victories are both tournament records.

There have been three previous occasions when Liverpool have secured a 1-0 lead after the first leg and on each occasion we have gone on to reach the final (going on to lift the trophy on two of those occasions). The 1981 semi-final against Man City saw us secure a 1-0 victory at Maine Road with the second leg at Anfield finishing 1-1. In 1995, we defeated Crystal Palace at Anfield 1-0 and won the second leg at Selhurst Park by the same scoreline. More recently, we defeated Watford at Anfield 1-0 and won by the same scoreline at Vicarage Road in the second leg.

Finally, according to Opta Joe: Only two of the 25 teams to have previously won away in the 1st leg of a League Cup semi-final have failed to reach the final.

Liverpool’s record at the semi-final second leg stage of the League Cup: