Cup competitions never mean the same thing each year; or indeed, the same thing to each and every club. For starters, when it’s your team that’s in a final, even the League Cup can hold some importance.

It means more when you’ve had to wait a while for a final. It means more when you’re not in contention for the league title and outsiders for the top four, and need some consolation (and a return to the habit of winning silverware; see how Arsenal struggled after losing in last year’s final).

And it means more when you’ve had to do it the hard way. The most impressive thing about Liverpool’s run to the final has been the way it’s been earned.

It reminds me somewhat of the 2006 FA Cup run. After the Champions League success a year earlier it would have been easy to see it as irrelevant. But the fact that Liverpool beat so many Premier League teams en route, including Manchester United and Chelsea, gave it an extra significance. A great final only added to the sense of achievement, and keep the memories strong.

This time, Liverpool have won away at Stoke, Chelsea and Manchester City. None of those clubs were ‘fielding the kids’, even if they had other competitions to keep them warm at night. Brighton away was also a tough tie, with the Seagulls leading the Championship at the time. The finals are all that tends to be remembered by most neutrals, but the opposition you beat in getting there forms the full story. It’s not your fault if you only face minnows – you can only beat what’s in front of you, and your name gets carved on the cup no matter who you’ve beaten – but the way you win it adds to cachet.

Having said all that, Liverpool have been outstanding against the bigger clubs this season, but increasingly lacking in intensity against less-illustrious opponents (acerbated by the absence of Luis Suarez, whose indefatigability, allied to defence-opening skills, makes him a necessity in such games). So Cardiff may present the toughest possible kind of opposition, in terms of Liverpool’s current mentality. The underdog is never under as much pressure.

This hasn’t exactly been a season in need of rescuing; this isn’t 2010/11, after all. But it has needed a pick-me-up, a tonic. Here are some more reasons why it could prove a vital shot in the arm. 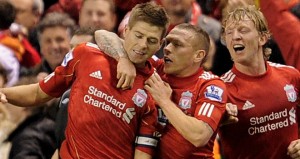