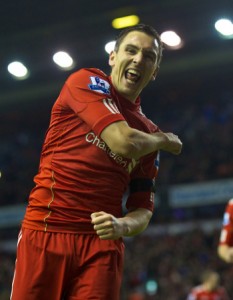 Just over a week has passed since we lost 3-0 to Manchester City at Eastlands in the Premier League. A week is a long time in the world of football and since that result, Liverpool have progressed to the 4th round of the FA Cup – where we will face Manchester Utd at Anfield – thanks to a 5-1 victory over Oldham Athletic.

Man City were eliminated from the same competition, losing 3-2 to Man Utd after having their captain – Vincent Kompany – sent off after just 12 minutes into the contest. City appealed Kompany’s dismissal but failed, so he now gets an extra game ban and misses four matches, including both legs of the League Cup semi-final.

On top of the above, Yaya and Kolo Toure are unavailable for Roberto Mancini as they represent the Ivory Coast at the Africa Cup of Nations, so the City side that faces Liverpool could be a weaker team (on paper) than the one that inflicted our second heaviest defeat of the season, and they will be missing their two stand-out players that night in Kompany and Yaya Toure.

Liverpool have faced Manchester City on four occasions in the League Cup, and if you’re looking for a lucky omen, the 1980/81 League Cup campaign could provide just that. We faced City in the semi-finals of the competition that season, winning the first leg at Maine Road 1-0 thanks to an 81’ minute strike from Ray Kennedy. The 2nd leg at Anfield finished 1-1 with Kenny Dalglish scoring for the Reds, meaning we won the tie 2-1 on aggregate. Liverpool went on to defeat West Ham Utd in the final (after a replay) and won the competition four years in a row from 1981 to 1984.

All Spanish Speakers Are Racist