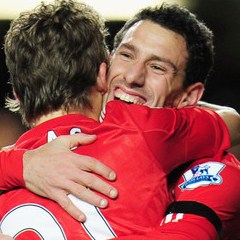 Liverpool’s reward for their 2-0 victory over Chelsea on Tuesday night is a two-legged semi-final against Manchester City in January, with the winners set to face either Crystal Palace or Cardiff at Wembley. Before then we have seven league games (freezing wintery weather permitting) to keep us occupied with the first of these fixtures at Craven Cottage against Martin Jol’s Fulham on Monday night.

Our last trip to the Cottage saw us produce a fantastic display of attacking football as we ran out 5-2 winners and more of the same would do very nicely. The loss of Lucas to a serious knee injury is a big blow to Liverpool and has resulted in the recall of Jonjo Shelvey from his loan spell at Blackpool.

It will be interesting to see who Dalglish and Clarke decide to partner with Adam in centre midfield. The continued absence of Steven Gerrard means it is likely to be one of Jordan Henderson, Jay Spearing or the returnee Shelvey. None of the players mentioned can match Lucas in terms of what he brings to the team (although Spearing is probably the most similar in-terms of style, if not of the same quality) so it may mean a change in tactics or formation to find the right balance until the Brazilian returns.

Liverpool’s overall record against Fulham in the league (including PL stats):